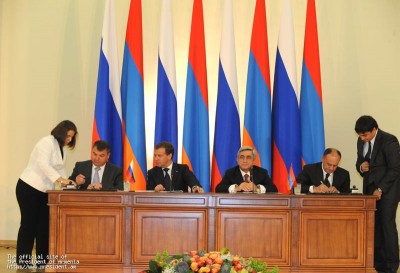 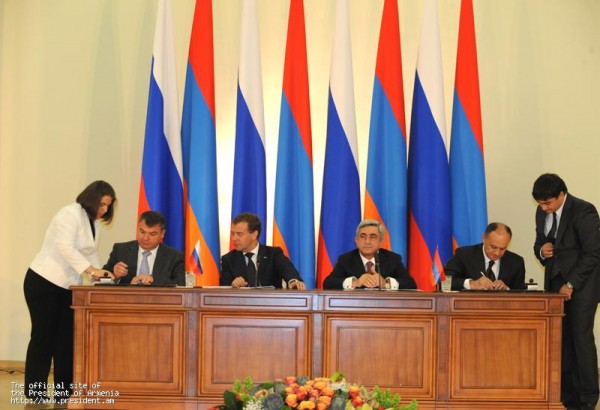 Russian and Armenian defense ministers sign the protocol to the 1995 Russian-Armenia military agreement, as the presidents of the Russian Federation and Armenia look on.

In his interviews published on August 25 with Zhamanak and Capital dailies, Giro Manoyan, director of the ARF-Dashnaktsutyun Bureau’s international secretariat spoke about a military agreement signed recently between the Republic of Armenia and the Russian Federation to extend the 1995 treaty regulating the presence of a Russian military base in Gyumri for another 24 years.

Noting that the document has not yet been released and discussions regarding its contents can only be based upon official announcements, Manoyan said that more than extending the dates of the contract for Russian bases, there has been a shift of the general functions of the military base and it is in this light that this document must be viewed. “In general, the document contains certain positive points. However aside from the points written in the document and the existing provisions, there is an issue of how these changes will be applied,” Manoyan said. “In other words, has the Republic of Armenia given up some of its sovereignty? This [conceding sovereignty] doesn’t necessarily mean that it was actually included in the document; it can be expressed through the behavior of the Russian Federation or the Republic of Armenia. Here we must be careful that Armenia does not concede its sovereignty.”

Manoyan went on to say that it is not possible to ignore what is taking place in terms of Russia-Azerbaijan and Turkey-Azerbaijan relations. “In reality the failed attempt at resolving Armenia-Turkey relations can be tied to the new level of relations between Azerbaijan and Turkey; in particular, they have begun talking about a Turkish military base in Nakhichevan.”

While expressing concern, Manoyan said that he did not believe that the text of the actual agreement contained concessions on the part of Armenia. “This is an agreement between two equal partners and this is how it should be perceived by both sides. The Russian Federation must accept us as such and move forward accordingly,” he stated and added that Russia does what it does out of its own national interests and Armenia should maintain its own national and state dignity.

When asked if an extended Russian presence would alleviate the tension in the region, Manoyan stated that Russia, in its dealings with Armenia and Azerbaijan and to a certain extent with Turkey, is striving to increase its influence and in parallel do this to maintain stability.

The ARF-D leader said that it is too early to say if the party is in favor of this agreement because they have not had a chance to view the actual document.

Armenian authorities are stressing the importance of this agreement and the necessity of having Russian forces on the Armenian-Turkish border while recently they wanted to normalize relations with Turkey. “This agreement appears to be a result of the failure of establishing [Armenia-Turkey] relations. While it is true that legally the [Armenia-Turkey] protocols are still alive, but politically they are dead. And it is because of this failure that Armenian authorities took this current step.”

There is also serious concern about the planned sale of Russian S-300 air-defense systems to Azerbaijan. “It is incomprehensible and worrisome that our strategic partner has entered into such a deal with our opponent,” Manoyan commented and went on to say that the purchase of these air-defense systems would not necessarily give Azerbaijan a military advantage, but it could increase the chances of a potential attack. “We have to express our concern and dismay that such a step would encourage Azerbaijan to be more bold, more self-confident and brazen. And that can bring unpredictable consequences for the entire region.”

An ARF-D parliamentary faction member and chair of the National Assembly’s Standing Committee on Defense, National Security and Internal Affiars, Hrayr Karapetian said that Azerbaijan’s expenditure on the military must be condemned and noted that it is worrisome when a member of the Collective Security Treaty Organization shows military support to Azerbaijan.

General Arthur Aghabegian, former deputy defense minister and current member of the ARF-D faction in parliament said that within the agreement extending the presence of Russian military forces in Armenia, there is no stipulation that states that in the event of war, Russian troops will become involved. “In this regard, the presence of Russian bases in Armenia has a political significance more than a military one,” Aghabegian said. “And if the Russian Federation does not sell the C-300 anti-aircraft missile, Azerbaijan, I believe, could procure them from elsewhere. And even if they do purchase it from Russia, Armenia will simply have to resign itself to this fact and consider that the opponent has modern defensive, and I stress defensive, weapons.”

Armenian Defense Minister Seyran Ohanian played down the significance of a possible sale of sophisticated Russian anti-aircraft missiles to Azerbaijan, saying that it will not give Baku a “strategic advantage” in the unresolved Nagorno-Karabakh conflict. Ohanian also asserted that as a result of a new defense agreement signed by Moscow and Yerevan last week, Russian troops could openly back Armenia in the event of renewed Armenian-Azerbaijani war.

The agreement in question extended Russia’s lease on a military base in Armenia until 2044. It also commits the Russians to supplying the Armenian military with modern weaponry. Armenian The defense minister further reaffirmed his government’s plans, announced earlier this month, to obtain new long-range precision-guided weapons in the coming years. They would be aimed at “strategic facilities” of Armenia’s hostile neighbors, he said without elaborating.