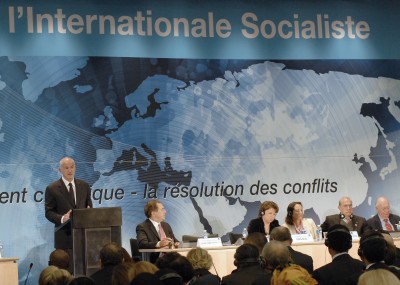 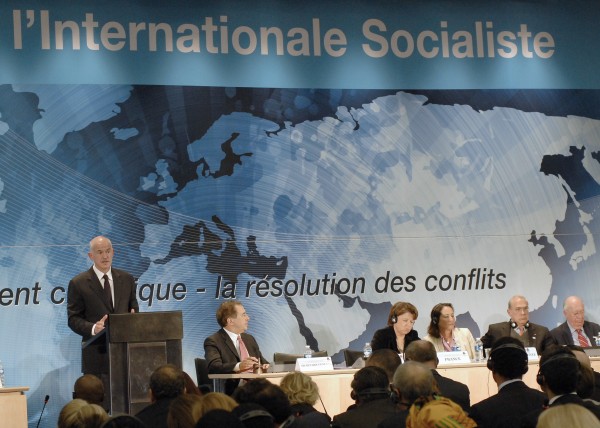 President of the Socialist International, George Papandreou speaking at the SI Council meeting in Paris

The Socialist International Council, meeting in Paris, adopted a resolution on the Mountainous (Nagorno) Karabakh issue, committing itself to continue its initiative for peace, aimed at building dialogue and confidence both within the International and and on the wider political stage. The SI Council qualified as “extremely positive step” its two meetings held in Yerevan and Baku this year.

The second meeting of the Council of the Socialist International in 2010 took place on 15-16 November in Paris, as agreed at the previous Council meeting held at the United Nations Headquarters, New York in June.

The meeting was held at the headquarters of the Organisation for Economic Co-operation and Development, OECD. At the opening, following remarks by the SI Secretary General, speakers included Angel Gurría, Secretary General of the OECD, Martine Aubry, First Secretary of the French Socialist Party (PS) and Prime Minister George Papandreou, President of the Socialist International.

The Armenian Revolutionary Federation-Dashnaktsutyun took part in the Council Meeting of the Socialist International in Paris. Delegates attending the meeting included Jalal Talabani (President of Iraq), Kemal Kilicdaroglu (leader of Turkey’s Republican People’s Party, CHP), Poul Nyrup Rasmussen (President of the Party of European Socialists, PES), Sergey Mironov (Speaker of the Federation Council of the Russian Federation and leader of the Fair Russia Party) and other dignitaries.

In accordance with the decision taken at the meeting of the Presidium of the Socialist International held on 20 September, the agenda for this Council meeting included three main themes, focusing on The Global Economy, Climate Change and the forthcoming COP16, and Resolution of Conflicts.

In the first main theme, under the title The World Economy: mapping out a sustainable recovery that works for all, participants discussed the latest developments in the global economy, including the G20 Seoul Summit and its outcome. Looking at the recovery from a social democratic perspective, contributions were heard on ways to ensure that the recovery is fair, equitable and sustainable, and to the benefit of ordinary citizens.

Following this debate, the meeting turned its attention to the second theme, Facing the Consequences of Climate Change: The urgent need for a meaningful agreement at COP16. With the forthcoming Sixteenth session of the Conference of the Parties in Cancún representing another vital opportunity for leaders of the world to unite and take meaningful action on climate change, the International once more put this theme at the heart of its agenda, defining the social democratic priorities on this most crucial of issues, which will shape the future of our planet.

The discussions on the third main theme, Overcoming Conflict: Strengthening democracy and security, concentrated on the positive effect that resolving conflicts wherever they occur can have on the ability of a country and a society to have a stable democracy and provide security for all. In 2010, the International had actively promoted conflict resolution in the South Caucasus and the Middle East, continued to develop its platform on disarmament issues, supported democracy in different regions of the world and sent electoral observation missions.

At the end of the Council Meeting a resolution on the Mountainous Karabakh conflict was adopted, which reads:

The Socialist International has maintained a commitment throughout its existence to the resolution of conflict through dialogue and negotiation, and there are many cases where this approach is needed to bring solutions to long-standing conflicts.

Greatly encouraged by the meetings held by our International this year in Yerevan and Baku, where Armenian and Azerbaijani representatives from our member parties were able to engage in unprecedented dialogue over their differences and visions for the settlement of the Nagorno Karabakh issue, we extend our recognition to our member parties and governments of Armenia and Azerbaijan for hosting the delegates of Socialist International member parties from the other country, and view this as an extremely positive step.

We now see an opportunity and a need to make use of the foundations that have been set, to build dialogue and confidence both within our International and on the wider political stage in those countries.

It is crucial to advance the resolution of the conflict of Nagorno Karabakh among both countries to ensure peace and stability in that region. The SI, which has launched its initiative for peace, will persevere and continue its efforts to advance on:

A. Formalisation of the status of Nagorno Karabakh, and a final status for the region that is acceptable to all;

B. Establishment of the rights of displaced persons of both sides;

C. Calling for respect of the 1994 ceasefire agreement and refraining from all types of ceasefire violations, including sniper fire;

D. Calling on the parties of the conflict to display political will to reach an agreement on mutual, commensurate, equal and concurrent concessions to address the main questions of the conflict;

The international community must be actively involved in the resolution of this conflict, working with Armenia and Azerbaijan to encourage a peaceful solution.