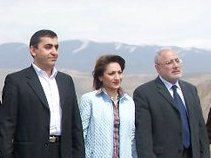 [1] ARF-D Parliamentary Faction members Vahan Hovhannesyan, Armen Rustamyan and Lilit Galstian on separate interviews they gave in newspapers and websites were critical of the government’s recent decisions to change the Mayor of Yerevan and the Chief of Police. They all pointed out that the government hasn’t provided any explanations about the reasons behind these changes. Oddly enough the leadership of the Republican Party has only good things to say about the two men. ARF-D Parliamentarians firmly disapproved of these tactics and expressed their conviction that these are only pre-electoral fireworks. They also called the people to step up and oppose to this kind of politics.