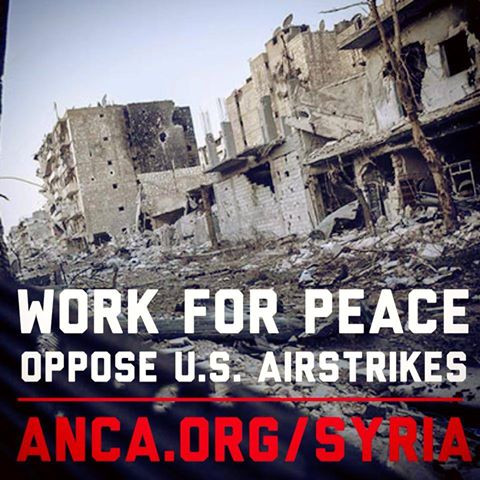 [1](asbarez.com [2]) – EDITORIAL: As President Barack Obama prepares to address the nation, once again, on his intention to attack Syria, Armenian-Americans must unequivocally oppose the administration’s plans to engage in yet another war in the Middle East, keeping in mind the definitive impact such an attack will have on the Syrian-Armenian community.

The tactic adopted by the Obama Administration to convince the American people of the righteousness of an attack on Syria is reminiscent of when President George W. Bush wanted to secure—at all costs—approval to attack Iraq in 2003, heralding claims of the existence of weapons of mass destruction and Iraq’s role in the 9/11 attacks, all of which proved to be false.

The cost of attacking Syria is high. Although the US claims it plans to strike Syria’s military and alleged chemical weapons targets, the loss of civilian life is imminent. The Christian minority population, which includes the large Syrian-Armenian community, will be directly in harm’s way.

Throughout the Syrian conflict, the Armenian community there has weathered enormous losses and continues to live in unbearable conditions, while steadfastly defending the cities and neighborhoods that are populated by Armenians, especially in Aleppo.

Syria has immense significance to the entire Armenian nation, not only as a safe-haven for survivors of the Armenian Genocide, but also as a crossroads of civilizations. Before the crisis began, the present-day Syrian-Armenian community was an integral part of Syria’s development and contribution by Armenians to civil society propelled a safe and secure existence for the community.

The Obama administration is out to teach a lesson to Syria and to assert its role as a superpower. However, in this case, its calculations are simply wrong, because, in its rabid effort to topple the current regime, the US is aiding and abetting groups whose ultimate intentions are to destroy America and cause harm to American interests.

If Obama’s intentions are to punish those who have caused the loss of so many civilian lives, especially after the alleged chemical weapons attacks late last month, perhaps it could take a moment to look inward and assess the volume of casualties caused by US-led drone attacks across the world. To whom is the US accountable for these atrocities?

According to media reports, the majority of Americans are opposed to US intervention, in any form, in the Syrian conflict. If Congress is truly representative of the popular will, then it will oppose the proposed US strikes against Syria.

Earlier this week, the Armenian National Committee of America launched a campaign to make Armenian-American opposition to the Syria attacks known to members of Congress. Take a moment to voice your opposition [3] to US airstrikes.

The proposed US airstrikes against Syria will not resolve the ongoing crisis in that country, nor will they benefit the international community. From our perspective, they will further deteriorate the conditions for our Armenian brothers and sisters in Syria. Let us collectively oppose US airstrikes on Syria.