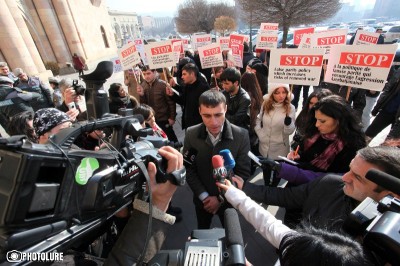 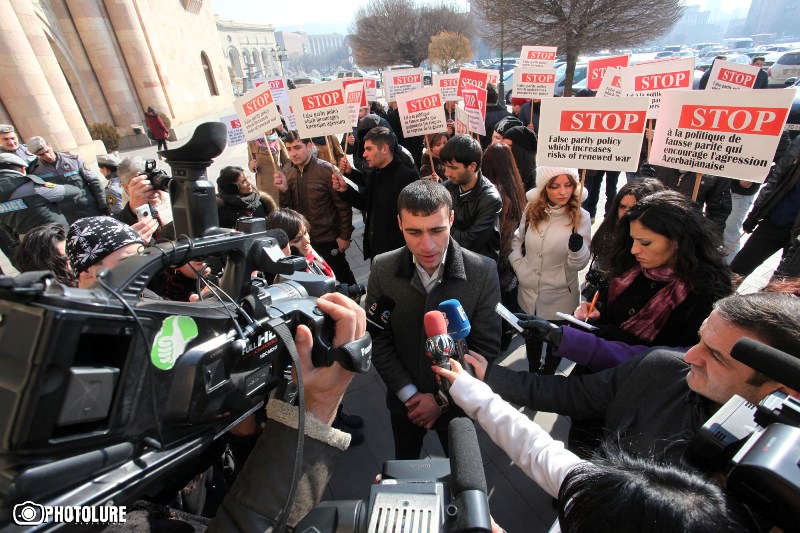 Members of the ARF-D “Nikol Aghbalyan” Student Association and the Armenian Youth Federation were gathered near Armenia’s Foreign Ministry today, to protest against the false parity policy in connection to the Azerbaijani aggression, applied by the OSCE Minsk Group which is mandated with resolving the Nagorno Karabakh conflict. The Minsk Group Co-Chairs James Warlick (USA), Igor Popov (Russia) and Jacques Faure (France), and Ambassador Andrzej Kasprzyk, Personal Representative of the OSCE Chairman-in-Office who are visiting Armenia, were “greeted” by the protesters who were calling them to put an end to their false parity policy, holding banners with slogans written in the Co-chairs’ native languages.
Chairman of the Executive Body of the ARF-D “Nikol Aghbalyan” Student Association, Gerasim Vardanyan stated that the Co-chairs’ stance of evenly accusing the sides to the conflict doesn’t bring a peace resolution closer but rather encourages Azerbaijan’s bellicose rhetoric.
Only a few days ago two Armenian soldiers, Karabakh Army junior sergeant Armen Hovhannisyan and conscript Karen Galstyan were killed by Azeri forces on the frontline, in Nagorno Karabakh.
“N. Aghbalyan” called political parties’ youth organizations to join and to adopt a united position in regard to Minsk Group’s policy. However no other youth organization was present at today’s protest, news.am reports.