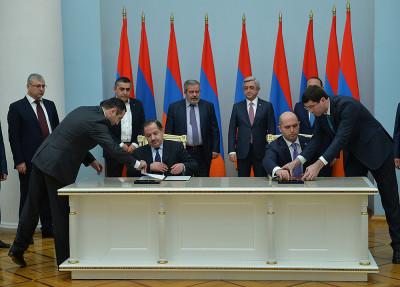 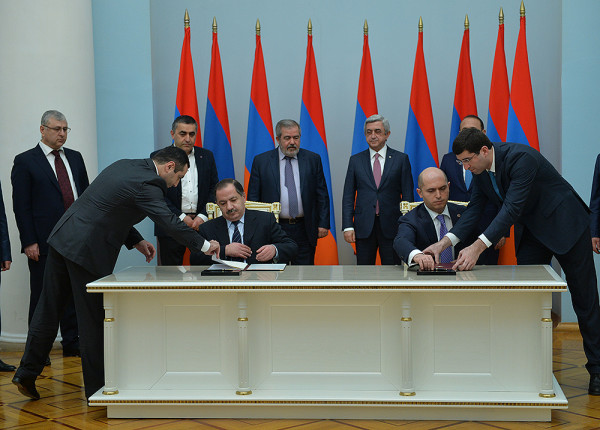 The agreement, which was signed by ARF-D Armenia Supreme Body Representative Aghvan Vardanyan and RPA Deputy Chair Armen Ashotyan, is comprised of three main headings that cover a wide array of issues the two parties will collaborate on. Most notably, the agreement highlights the fact that the ARF-D and the RPA will work closely to make the various aspects of Armenia’s new constitution a reality. The agreement also notes several internal and external issues the two parties will work together on, including social, national security, and economic issues, as well as educational initiatives.

In an interview with Armenia’s Yerkir Media shortly after the signing, Vardanyan confirmed the assignment of Levon Mkrtchyan (minister of education), Davit Lokyan (minister of territorial administration), and Artsvik Minasyan (minister of economy). He also confirmed that ARF-D members Hovsep Simonyan and Gagik Gyozelyan will be assigned to serve as governors of Shirak and Arakadzodn provinces, respectively.

In an interview with RFE/RL’s Armenian service (Azatutyun.am) on Feb. 18, ARF-D Bureau member Armen Rustamyan noted, “There are no time limitations on the agreement, since it is not an ordinary agreement related to [forming] a coalition, but a long-term vision on cooperation.” He stressed that the main issue is the realization of various aspects of the new constitution. “In this respect, the agreement has a long-term nature that looks to the future…we are talking about a cooperation that is being shaped based on a truly political and ideological foundation,” he said.

When asked whether the vision outlined in the agreement could remain on a piece of paper, without being implemented, Rustamyan responded, “No. Firstly, everything begins with words, desires. The rest is up to us, so that we turn them into reality. After making these public announcements, and after expressing our readiness and commitment, it would simply be sloppy for any political force not to do what it has set out to do—especially for the ARF-D, which is accountable to, not 20- or 25-, but a 125-year history. We know the cost and significance of that responsibility, as well as the weight of words.”

Armenia’s Parliament approved the proposed package of constitutional reforms, which called for a shift from a semi-presidential to a parliamentary form of government, on Oct. 5, 2015. The ARF-D has supported and promoted a parliamentary system of government in Armenia since its independence. Under the new system, Armenia would work with a 101-seat parliament with a 5-year term elected entirely by proportional representation.