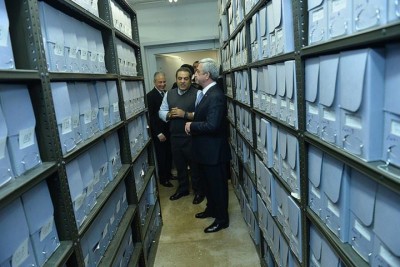 (armenianweekly.com [1]) WATERTOWN, Mass. — Armenia’s President Serge Sargsyan visited the Hairenik Association building in Watertown on Mon., March 28, on his first day of a working visit to the United States. 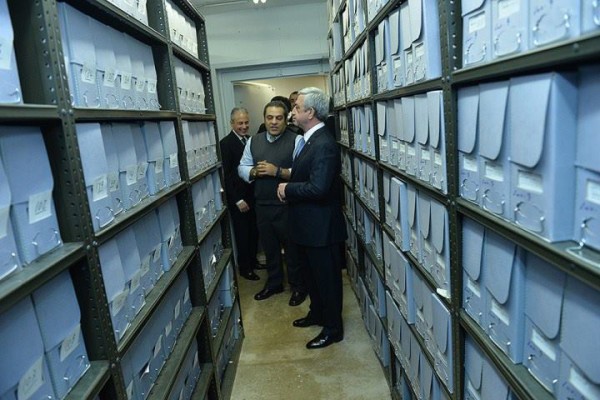 [2]Escorted by ARF-D CC Chair Hayg Oshagan, Sargsyan began his Hairenik visit with a brief tour of the Hairenik and Armenian Weekly offices, where he met the editors and staff of the newspapers.

Sargsyan was then shown the ARF-D and First Republic Archives. Prof. Asbed Kotchikian, director of the archives, provided an overview of the history and contents of the collection. Sargsyan expressed his interest in collaborating to help digitize the First Republic archives. Kotchikian presented Sargsyan with a copy of the 1918 Declaration of Independence of the First Republic.

The delegation, hosts, and guests then gathered in the ARS Central Executive Offices where Oshagan welcomed the president, his delegation, and community members. He noted the significance of the president’s visit as well as the legacy of the Boston Armenian community, remarking on the history of the ARF-D, the Hairenik Association, and its sister organizations in the region. Oshagan also noted that the Hairenik building symbolizes the resilience and strength of the Armenian Diaspora, as well as its potential for growth.

The ARF-D chair then presented Sargsyan with a framed picture of the first delegation from the First Republic to visit the United States. The photograph was taken in Boston in 1919. Oshagan said he hopes the photograph will serve to remind the president of his visit, and of how far the Armenian nation has come. Sargsyan thanked the Central Committee and all those gathered for the reception.

On the occasion of the 100th anniversary of the Musa Ler resistance, Oshagan presented [3] the Sardarapat Memorial and Museum’s “Yervant Lalayan” medal to Zohrab Tazian, on behalf of Sardarapat Memorial and Museum Director Karen Aristakesyan, for his years of service to the Armenian Cause and the strengthening of Armenia-Diaspora relations, as well as for his contributions to the Musa Ler Resistance Museum in Armenia.

Sarkisian presented Oshagan with a case containing commemorative coins depicting the monasteries and cross-stones of Armenia.

Sarkisian was joined by Armenian Minister of Education Levon Mkrtchyan, Minister of Diaspora Hranush Hakobyan, Armenia’s Ambassador to the U.S. Grigor Hovhannisian, Armenia’s Ambassador to the U.N. Zohrab Mnatsakanyan, Chief of Staff Vigen Sargsyan, Prelate of the Eastern Prelacy of the Armenian Apostolic Church Archbishop Oshagan Choloyan, and Prelate of the Eastern Diocese of the Armenian Apostolic Church Archbishop Khajag Barsamian, as well as other high-ranking members of the presidential staff.

Sargsyan is visiting Boston on the occasion of the 25th anniversary of the second independence of the Republic of Armenia. He will tour Boston, meeting with state officials, visiting landmarks and notable institutions, and taking part in community events and gatherings until his departure to Washington, D.C. on March 31. Sargsyan is visiting the United States to participate in the 4th Nuclear Security Summit in Washington, which will take place from March 31 to April 1.