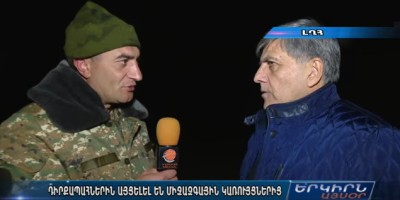 In an interview to Yerkirmedia [1], Socialist International Vice President, former ARF-D Bureau member, Mario Nalpatian stated that the purpose of his visit to Nagorno Karabakh was not only to meet friends and comrades in the frontline but to prepare a serious and accurate report regarding the situation in Nagorno Karabakh which he intends to present to his fellows in the Socialist International as he has assumed the responsibility to do so.

He reminded that on April 4 the Socialist International issued a statement [2] calling both sides to immediately end the confrontation and contribute in the peace process within the OSCE Minsk Group which both Armenia and Azerbaijan have accepted as the negotiation format.

Nalpatian mentioned that Azerbaijan’s over-armament and Aliyev’s warmongering rhetoric, which have been criticized and condemned by SI at the time (see below), led to the April 1-2 aggression against Nagorno Karabakh Republic. “It is my duty -like you and the volunteers who stand today on the frontline- to collect information and pass it on in detail to the Presidium and the Secretary General of the Socialist International. After all the international community has an obligation and a responsibility regarding to what happened” he said.

The SI Vice President said that he visited various posts on the frontline where it is clear as to what has taken place these past days. It remains for us to coordinate our work in political, diplomatic and defense levels in order to inform the international public opinion and political circles and to push for a necessary condemnation of Azerbaijan and Aliyev’s actions.

Asked if he feels optimistic about the outcome of that effort, Nalpatian responded positively. The evidents of brutal human rights violations such as torturing and mutilation which the Nagorno Karabakh Republic Prosecution is in position to establish, are overwhelming and amount to war crimes for which Aliyev and his regime must be held accountable. “This is a very serious matter” Nalpatian pointed out.

In reply to a question about his impressions from his encounters with the soldiers and the people Nalpatian said that they all are proud for defending their country, and ready to even sacrifice their life. “Peace violation and war can naturally cause worry however, upon my return I will let my friends and especially non-Armenians know that this people will not retreat and are ready to go all the way to the end” he concluded.

A range of issues concerning the wide-scale combat operations launched recently by Azerbaijan against Nagorno Karabakh was discussed during the meeting.

Sahakyan stressed the importance of raising the issue in the international arena, and presenting objective information on the aggressive policy of Azerbaijan. Such efforts would greatly contribute to further preventing and condemning such activities, he noted.

The President of Nagorno Karabakh said he greatly values the comprehensive assistance—both political and psychological—shown by the Armenian Diaspora to Artsakh in recent days.

The Socialist International is the worldwide organization of social democratic, socialist and labor parties. It currently brings together 170 political parties and organizations from almost 140 countries.
In 2003, ARF-D was the first one among CIS political parties, to hold a SI full membership status.
ARF-D Bureau member, Mario Nalpatian serves as SI Vice-President while ARF-D Bureau member Armen Rustamyan is Co-Chairman of the Committee for the CIS, the Caucasus and the Black Sea. ARF-D is also a member of the Statutory Committee on Finance and Administration of the SI.
AYF member Garabed Chadoian is one of the Vice-Presidents of IUSY.
The ARF-D Women’s Group is a full member of the SIW (Socialist International Women). The youth organization of the ARF-D, the Armenian Youth Federation, is a full member of the IUSY (International Union of Socialist Youth), and of YES (Young European Socialists, former European Community Organization of Socialist Youth – ECOSY).

SI Committee for the CIS, the Caucasus and the Black Sea
Chişinău, Republic of Moldova, 23-24 July 2012

Based on the SI statement unanimously adopted by the 2010 November SI Council in Paris on the Nagorno-Karabakh conflict, the Committee expressed its concern regarding the recent announcements by Azerbaijan that it will not pull out its snipers from the line of contact with Armenia and Nagorno-Karabakh and continuing threats against the resumption of Karabakh-Armenia civilian flights, contrary to assurances given to the OSCE Minsk Group co-chairs. The SI will continue to build contacts and establish dialogue with like-minded political interlocutors in Azerbaijan to further pursue its work with actors from both parties to the conflict in the search for a peaceful, negotiated settlement.

Participants positively assessed the fact that the international community has gradually come to accept that living in a non-recognised state does not deprive the citizens of that entity from their basic human rights and freedoms, as well as from internationally accepted civil and political rights, including the right ‘to take part in the conduct of public affairs, directly or through freely chosen representatives’, as established in article 25a of the International Covenant on Civil and Political Rights adopted by UN General Assembly resolution 2200A (XXI). It is in this context that recent elections in Nagorno-Karabakh should be viewed.

For conflict resolution
The Socialist International has maintained a commitment throughout its existence to the resolution of conflict through dialogue and negotiation, and there are many cases where this approach is needed to bring solutions to long-standing conflicts.
Greatly encouraged by the meetings held by our International this year in Yerevan and Baku, where Armenian and Azerbaijani representatives from our member parties were able to engage in unprecedented dialogue over their differences and visions for the settlement of the Nagorno Karabakh issue, we extend our recognition to our member parties and governments of Armenia and Azerbaijan for hosting the delegates of Socialist International member parties from the other country, and view this as an extremely positive step.
We now see an opportunity and a need to make use of the foundations that have been set, to build dialogue and confidence both within our International and on the wider political stage in those countries.
It is crucial to advance the resolution of the conflict of Nagorno Karabakh among both countries to ensure peace and stability in that region. The SI, which has launched its initiative for peace, will persevere and continue its efforts to advance on:
A. Formalisation of the status of Nagorno Karabakh, and a final status for the region that is acceptable to all;
B. Establishment of the rights of displaced persons of both sides;
C. Calling for respect of the 1994 ceasefire agreement and refraining from all types of ceasefire violations, including sniper fire;
D. Calling on the parties of the conflict to display political will to reach an agreement on mutual, commensurate, equal and concurrent concessions to address the main questions of the conflict;
The international community must be actively involved in the resolution of this conflict, working with Armenia and Azerbaijan to encourage a peaceful solution.