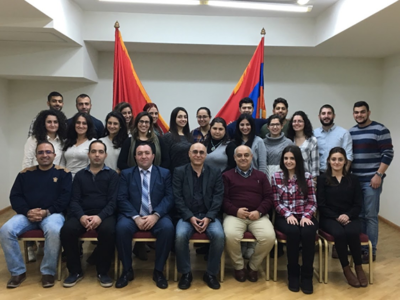 (asbarez.com) This was going to be my fourth trip to Armenia and naturally I could not wait to step foot back into the country where I feel most at home. This trip, however, was unlike my other visits—I was not visiting with family, nor was I participating in volunteer work. Instead, I had the honor of representing the Armenian Youth Federation-Youth Organization of the Armenian Revolutionary Federation-Dashnaktsutyun (AYF-YOARF) Eastern Region United States at the Armenian Revolutionary Federation-Dashnaktsutyun (ARF-D) Junior World Conference alongside my fellow ungeroohi, Ani Khachatourian.

The conference, which took place at the ARF-D Aram Manoukian Youth Office in Yerevan, was organized by the ARF-D Bureau Youth Office, and headed by the Director of ARF-D Youth Affairs, unger Sarkis Mkrtchian. The meeting was attended by 25 delegates from 12 regions across the world—including the United States, Syria, Lebanon, the United Arab Emirates, Holland, Iran, Cyprus, France, Javakhk, Artsakh (Nagorno-Karabagh), and Armenia. Unger Sasoun Nersesyan from ARF-D Armenia’s Supreme Council was also present and addressed the attendees during the opening and closing sessions of the conference.

The three-day meeting began with a presentation from each region and the ARF-D Youth Office, in which a two-year report of past activities was given. A question and answer session followed, which allowed the attendees to better learn the dynamics of the various organizations. The rest of the agenda was filled with fruitful discussions comprised of: how to train future Junior Advisors; how to strengthen ties with Juniors’ parents; obstacles the junior advisors face; the importance of retaining the ARF-D in educating the Juniors; and the importance of having a successful transition rate of Junior to Senior members.

One of the highlighted talking points throughout the conference was the value of making sure our work in our regions is transparent with the regions across the world, but most importantly with Armenia. The significance of holding similar events in the future and creating new ways to use technology to bring our regions closer will only allow for more collaborated events and projects to take place.

During the meetings, I continuously felt humbled and proud that Ani and I were given the opportunity to travel to our homeland and take part in discussions with fellow ungers who although we had never met, had more similarities than people we had known for most of our lives. 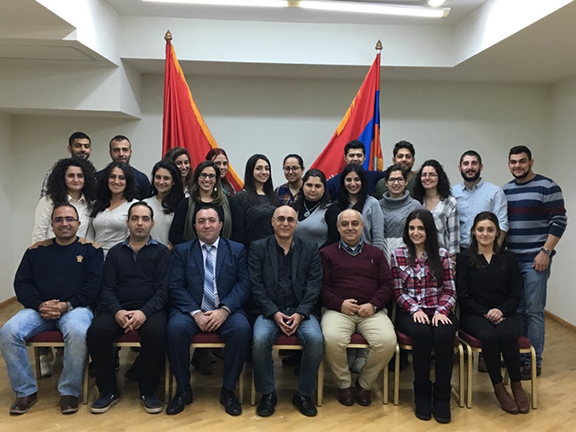 The participants of the 2016 ARF-D Junior World Conference

“To my right, I had ungers from Artsakh, to my left I had Ungers from Holland, and in between I realized that none of these people were here for themselves. They were here for the future of our badanis (Juniors), our nation, and our cause,” said Khachatourian.

As our days were coming to an end, and the sad reality of leaving Armenia was settling in, I kept thinking how I was going to return to my region and be able to transition and implement my thoughts and experiences to my fellow members. Although leaving Armenia has naturally been accompanied by many tears in my eyes, this time there was an excitement and fire within my heart to share how amazing the work of our organization and the importance of our Juniors can be. This meeting opened up my eyes to see how powerful and influential our organization is; I cannot wait to see the strides we take in the forthcoming years.

Our Juniors are not only our future, but the focus of our present. They are the protectors of our nation; they are the hope for the Armenian people.

(“Brave youth… You are the future of Armenia.)