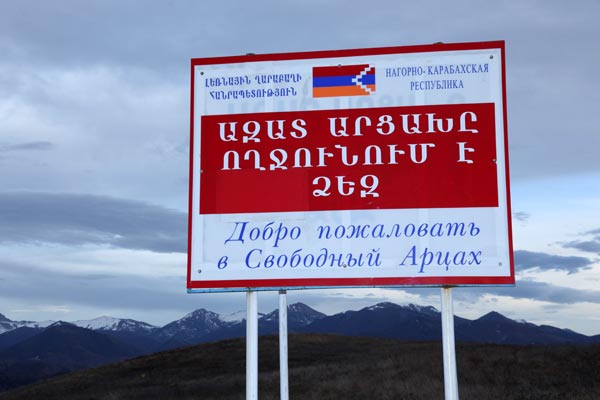 By and large, the OSCE Minsk Group Co-Chairs’ latest statement is not different from the previous one. The only difference is the wording “occupied territories surrounding Nagorno-Karabakh” – the Co-Chairs had not used this phrase in their written statements regarding this field mission, Giro Manoyan, international secretary of the Armenian Revolutionary Federation-Dashnaktsutyun (ARF-D) Bureau, told NEWS.am.

“In this aspect, the OSCE Minsk Group’s latest statement arouses some concern. What arouses concern is also the Co-Chairs’ tendency to call the Mountainous Karabakh capital ‘Stepanakert-Khankendi’. This is the mediators’ second statement mentioning Stepanakert in parallel with Khankend, which is bewildering,” Manoyan said. The most dangerous is, however, the co-chairs’ “field mission”, its real aim being the monitoring of the territories under the Armenian side’s control for the purpose of returning Azerbaijani refugees there. Manoyan stressed that the mediators’ actions are ineffective – they are dealing with the consequences, not the causes, of the conflict. “Moreover, the mediators do not say anything about Armenian refugees or of the need for their return,” Manoyan said.

VIENNA, 14 October 2010 – The Co-Chairs of the OSCE Minsk Group, Ambassadors Bernard Fassier of France, Robert Bradtke of the United States, and Igor Popov of the Russian Federation, released the following statement today:

“The OSCE Minsk Group Co-Chairs carried out their planned Field Assessment Mission to the occupied territories surrounding Nagorno-Karabakh. This Mission took place October 7-13, 2010, along modalities they had previously discussed with all sides involved. The Co-Chairs’ Mission was supported by OSCE Personal Representative of the Chairman-in-Office Ambassador Andrzej Kasprzyk and his staff, working with de facto local authorities. On the Co-Chairs’ invitation, three technical experts, including two from the United Nations High Commission for Refugees (UNHCR), assisted them in their tasks.

Prior to undertaking their Mission, the Co-Chairs met separately on October 6, 2010 with Azerbaijani President Ilham Aliyev and Armenian President Serge Sargsian to present details of the Mission and introduce their team. They also had a similar meeting October 7, 2010 with the de facto authorities in Stepanakert/Khankendi.

The Mission provided an important opportunity for the Co-Chairs to meet with numerous people on the ground and familiarize themselves with the overall current situation in the territories, in all aspects, including humanitarian needs. The unprecedented participation of technical experts from the UNHCR allowed the Mission team to understand better the rights, within the framework of international humanitarian law, of all refugees and displaced persons in the region and the conditions now facing those living in these territories.

The Co-Chairs, with input from the experts, are now compiling the information gathered during their Mission. After completing this work, they will prepare an internal OSCE report, which will be shared with all sides.”