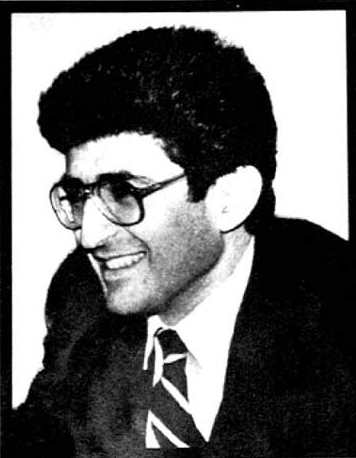 STEPANAKERT – The people of Karabakh paid their respects on Sunday, April 14, 1996, to the memory of the first president of the Moutnainous (Nagorno) Karabakh parliament, Arthur Mkrtchyan, who died four years ago in tragic circumstances.

The attendees observed a moment of silence in Mkrtchyan’s memory as well as for those self-defence fighters who fell during the Karabakh liberation struggle. Tovmasyan then outlined the life and work of the first leader of the Mountainous Karabakh Republic.

“There was a time when Turkish oppressors, utilizing all types of economic, political and ideological means, were aiming to rid Karabakh of Armenians. However, at such critical junctures in their history, nations give birth to their heroes, one of them was Arthur,” stated Tovmasyan.

The Karabakh National Assembly speaker told those gathered that the Armenian people were devastated by Mkrtchyan’s death, but were proud to have had such a dedicated person who fought for the survival of Karabakh and the entire Armenian nation.

Also speaking at the memorial gathering was Armen Sargsyan, chairman of the ARF-Dashnaktsutyun Karabakh Central Committee, who spoke of Mkrtchyan’s dedication to the enhancement of life for the people of Karabakh and stressed the important role Mkrtchyan played in creating the independent state of Karabakh.

Sargsyan also outlined Mkrtchyan’s adept diplomatic skills, coupled with the backing of a strong army and the unwavering dedication of the people benefited Karabakh’s struggle for self-determination and self-rule.

Mkrtchyan, an ARF member, was elected president of the Mountainous Karabakh Republic’s first parliament on Jan. 7, 1992 at the age of 33. He died on April 14 of the same year.