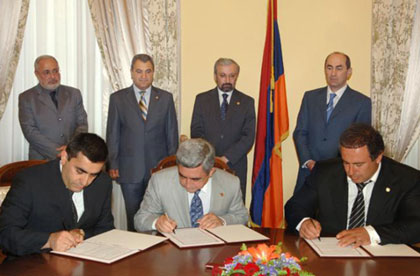 Signing the cooperation agreement with the ruling coalition, as President Kocharian (right) and other party leaders look on

YEREVAN — The Armenian Revolutionary Federation on June 6, 2007, entered into an unprecedented cooperation agreement with the new ruling coalition of the Republican Party and Prosperous Armenia Party. This agreement entails that the ARF-Dashnaktsutyun will introduce its own candidate for the 2008 presidential race, will fill two ministerial positions, one regional governor post and one of two deputy speakership of the parliament, as well as the chairmanship of two out of nine parliamentary commissions.

Speaking at a press conference following the signing of the agreement at the Presidential Palace, ARF-Dashnaktsutyun Supreme Council of Armenia chairman Armen Rustamyan announced that by signing a cooperation agreement and not joining the coalition, a new political process had been established in the Armenian reality. Rustamyan pointed to the ARF’s traditionally unique course of action and the preservation of its independent strategy, as well as its decision to enter the presidential race with a candidate representing the party as key reasons for not entering the coalition. He also cited differences in approach in addressing certain issues as another impetus for signing a cooperation agreement.

Rustamyan stated that this deal was signed for a period until the next presidential elections due early next year. Unlike Dashnaktsutyun, the two parties of the emerging coalition have agreed on close partnership until the next parliamentary elections. 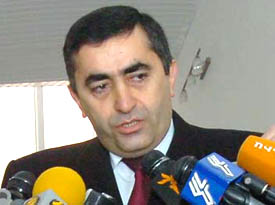 Rustamyan went on to announce that Davit Lokyan and Levon Mkrtchyan would retain their posts as agriculture and education ministers respectively, while the candidacy of Aghvan Vardanyan might be presented for the Labor and Social Services ministry, which is allocated to the Republican Party. The ARF-D will also hold the governorship of the Aragadzodn region and continue to chair the parliamentary commissions on foreign affairs, as well as defense and national security.

The official ceremony of signing the cooperation agreement with the new coalition took place at the Presidential Palace.
The agreement aims at the realization of the mostly concurring goals outlined in the Government’s plan of action and the ARF-D pre-election platform, as well as at the efficient handling of the existing challenges.

The Political Coalition and Parties for Cooperation pledged to implement joint policies in the partnership with each other and the President of Armenia. They assumed also responsibility to strive to effectively implement the Government’s plan of action, to provide for the realization of the arrangements attained in the framework of the signed agreements by their representatives and responsible persons engaged in the power structures. They also agreed not to undertake any steps that can directly or indirectly endanger the goals envisaged by the agreements.

The Political Coalition and Parties for Cooperation declared that their program and political priorities are a stable and unimpeded economic development, through a radical reduction of the shadow economy, implementation of more fair mechanisms for income distribution, encouragement of export-oriented manufacturing, increased efficiency in the fight against corruption, conclusion of the process of bringing the legislation in line with the constitutional changes, anchoring in the national legislation and political system the principles of checks and balances, creation of favorable conditions for the strengthening of civil society, conclusion of the reforms in the public service area, and formation of an open and efficient governing structure.

The agreements stipulate also the format for the participation of the Political Coalition and Parties for Cooperation in the state governing structures. 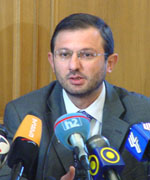 Another ARFD Supreme Council member Gegham Manukyan explained in a separate interview that the differences between being part of the ruling coalition and the cooperation agreement the ARF-D signed was that the party would be able to freely pursue its mission and interests without being tied to the responsibility for all government activities, as a coalition would entail. Manukyan also explained that being in a coalition inferred an unspoken agreement around and an endorsement for one presidential candidate, an issue about which the ARF-D had long said it would introduce its own candidate.
“This was critical turning point in Armenia’s political history,” said Manukyan.

He explained that the negotiation process with the ruling party and President Robert Kocharian was difficult in that the ARFD was insistent on pursuing its election platform, which heavily emphasized social reform and fighting against corruption in Armenia.

“The issue of ministerial posts and other government positions was never the main point of discussion for the ARFD, as we were pursuing the inclusion of our pre-election campaign platform issues in the agreement,” asserted Manukyan. Manukyan emphasized the importance of having the ARF-D’s position and program clearly delineated within the government program in a written document signed by all parties.

“The ARFD is an independent political force,” said Manukyan, adding that the current socio-economic polarization in Armenia, the shadow economy and corruption had propelled the ARF-D to fight against those injustices and ensure increases in social and minimum wages, an end to bribery in the various levels of government and promotion of social justice.

In discussing the upcoming presidential race and the ARF-D’s introduction of a candidate, Manukyan was clear to point out that the party’s statements on that matter were not a publicity ploy, as some segments of society had alluded.
“The ARFD always remains firm in its pledges to the public and months ago we had announced our intention to take part in the presidential race with our own candidate. We remain firm on that decision,” said Manukyan, adding, again, “we are an independent political force.”

Manukyan also explained that in the case of the ARF-manned ministries of education and agriculture, the ARF would be responsible for its activities and with this agreement the party had leeway in undertaking other activities and projects in those realms outside of government mandates or decisions.

“Let’s try to make a change in the areas of agriculture and education. The ARFD has the right to independently impact those spheres,” said Manukyan.

Manukyan also explained that both Lokyan and Mkrtchyan would continue to serve on the ARFD Supreme Council of Armenia, until the end of that body’s term in the fall.

Manukyan also emphasized that while the Republican Party of Armenia won a clear majority, it had to sit down and negotiate with the ARFD since the latter’s platform became a topic of discussion during the elections both by candidates and voters. More importantly, Manukyan said, the ARF-D, as a party that operates in 30 different countries, is a force with which any government would need to work.