GLENDALE–On a balmy California Friday evening, as thousands thronged to Glendale’s newest mega-shopping lifestyle outdoor mall dubbed the Americana, over 200 socially conscious intellectuals and activists gathered in the auditorium of the Public Library across the street to discuss modern issues of social justice and progressive politics.

The contrast and juxtaposition was telling and was a key component of the topics discussed at the two day conference titled “Armenians and Progressive Politics.”

The event was the first of its kind on the West Coast and the 5th in a series organized by the Armenian Revolutionary Federation-Dashnaktsutyun. One of California’s progressive radio stations, KPFK 90.7 FM (Radio Pacifica) and the Armenian Cultural Foundation cosponsored the event, which brought together renowned progressive artists, intellectuals and activists from South America, the United States, and Armenia for a critical examination of modern social issues afflicting Armenians and the wider global community. The symposium also featured a number of the personalities heard on Pacifica Radio.

You would not often find these topics discussed by CNN or Fox News, The issues covered over weekend were taken from the pages of news sources which find their audiences on publicly supported radio stations or blogger websites that are fast becoming the internet’s self-appointed purveyors of news. The issues discussed ranged from the war in Iraq and art’s role in raising social consciousness to women’s rights, socio-economic conditions in Armenia, the local labor movement and corporate influence in the media, all the while presenting them in both an Armenian and global perspective. 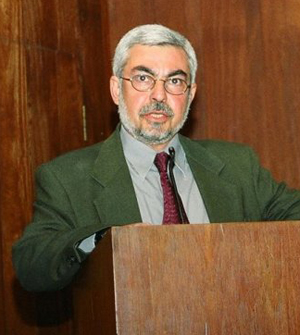 “The point of this conference is to raise social awareness,” said organizing committee member Razmig Shirinian during his opening remarks Friday night. “Our organization [The ARF] was founded 118 years ago upon revolutionary, nationalist, socialist, and democratic ideals…and we must remind ourselves and the people that social and critical thinking is necessary–that we should never give up our ideals…and our fight for basic rights and social justice.”

Over 200 people attended the opening of the symposium at the Glendale Public Library on Friday, where the topic of “Raising Social Consciousness Through Art and Music” was discussed. Moderated by California State Assembly member Paul Krekorian, Friday’s panel included the host of KPFK’s “Pocho Hour of Power,” internationally renowned political cartoonist, and journalist Lalo Alcaraz; author, playwright, actor, director, and painter Vahe Berberian; and host of KPFK’s “Beneath the Surface” program, antiwar activist, independent journalist and performance poet Jerry Quickley. 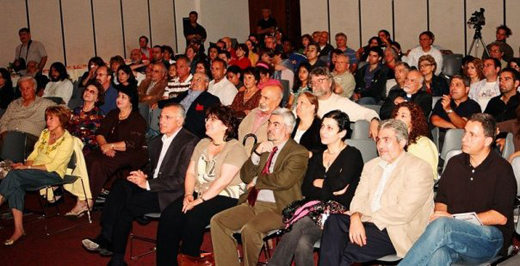 Jerry Quickley reciting a poem he wrote on the even of the US invasion of Iraq.

The emotional pendulum swung between the bitter comedy of Alcaraz who described his experiences drawing a nationally syndicated Latino themed cartoon strip to the politically charged and emotional poetry of Quickley who described his experiences living and documenting the events that took place in Baghdad during the first three days of the US led invasion. Art is a reflection of the times, was Berberian’s message as he underscored the political nature of art and the innate power of the artist to affect change in people’s lives simply by becoming who he or she is.

The conference took on an even more urgent tone as it continued into its second day at Glendale Community College where a packed room turned out for the all-day event, which featured four different panels.

The first panel on “Women’s Issues and Feminism” discussed gender equality, highlighting the disadvantaged life conditions of women in Armenia and the Diaspora. 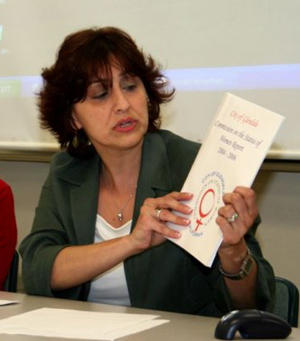 Lena Bozoyan talking about the challenges Armenian women faces in the Diaspora.

Gohar Shahnazaryan, a Dr. in Sociology at Yerevan State University and visiting scholar at the Institute of Slavic, Eurasian and East European Studies at the University of California, Berkeley, traced the woman’s role in Armenian society from its ancient and progressive roots to its modern challenges. Lena Bozoyan, a longtime community activist and former Vice Chair of the Glendale Commission on the Status of Women, shared her observations regarding women’s issues from the perspective of an immigrant, sharing her own extensive experience in promoting women’s issues in the Armenian Community in Southern California. While writer Nancy Agabian, spoke of her experiences working with local women in Armenia to publish a creative writing anthology, which gave women a space to discuss the various challenges they face in every day life. Moderating the panel was Glendale Board of Education Member and CSULA’s School of Social work instructor Nayiri Nahabedian.

The day’s second panel painted a broad picture of the evolving socio-economic conditions in Armenia through a dynamic discussion of various issues ranging from poverty, to individual and human rights, and the development of democracy in Armenia. 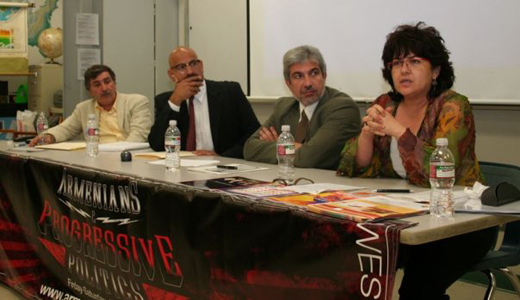 The panel featured Dr. Armineh Arakelian, Head of the Resource Building Institute in Democracy, Governance and Elections and International Lawyer and Political scientist, Dr. Khatchik Der Ghoukassian, a professor of International Relations at the Universidad de San Andres in Argentina and a visiting professor at the American University of Armenia, and Glendale College History Professor Dr. Levon Marashlian. Moderating the discussion was Dr. Markar Melkonian, a professor of philosophy at Cal State Northridge.

Covering the current social problems facing a vast majority of the country’s population, the panel highlighted how Armenia’s blind implementation of unfettered Neo-liberal capitalism provided fertile ground for post-election protests and upheaval. An emotional discourse was opened at the close of the panel where activists and panelists alike, spoke of the dire need for a truly democratic and socially conscious Armenia. 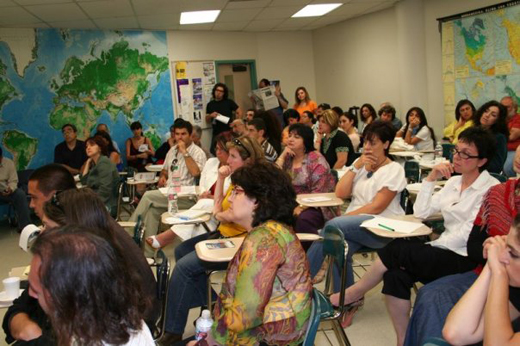 Roger Waldinger, an expert on international migration and a distinguished professor of sociology at UCLA, presented the demographics of the Armenian immigrant community and laid the foundation for a discussion on immigrant issues by union organizer Ty Hudson and Emma Oshagan, the founder and Chair of the Armenian American Mental Health Association of California. The topics of discussion covered in the panel ranged from a discourse on the psychological impact of Armenian immigrant life in the US to an overview of the economic exploitation of low wage immigrant workers. Moderated by award-winning writer and senior litigation attorney Aram Kouyoumdjian, the panel also included a discussion by Hudson on the recent successes of an intercommunity boycott that forced the Glendale Hilton to negotiate union rights and fairer wages for its primarily Armenian, Latino and Philippino workforce. 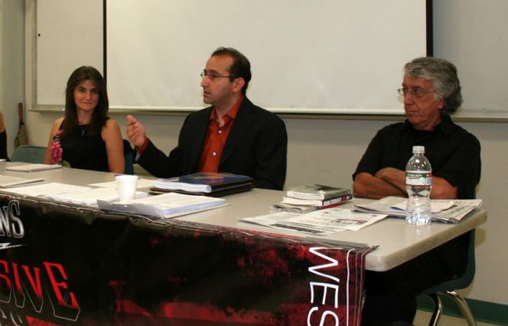 Armoudian kicked off the panel by providing a historical background on the fluid nature of an American media that began as propaganda and eventually neutralized to sell ads. Armenian discussed the present challenges the Armenian Community faces in educating the mainstream on its issues, and posited possible strategies currently being implemented by the Armenian National Committee as it seeks to redefine the media balance in America. Meanwhile, Barsamian, who is the host and founder of Alternative Radio, one of the most popular progressive talk shows in the nation, accused the media of being the ideological enablers of a political and economic system that has not only exploited and devastated Armenia but also much of the developing world. He pointed to the five major corporations that control what Americans here and see, and explained their influence as a type of tacit censorship, preventing journalists from bringing up issues such as the murder of over 1 million Iraqis in an illegal war.

Despite the seriousness and gravity of the topics discussed during the conference, the air was filled with optimism as both panelists and attendees exchanged and discussed their opinions and ideas. If opinions and heritage were the common thread among attendees, that’s where the similarities stopped, as the audiences of both days were a diverse cross section of the community.

For those two days, individuals from all walks of life–community activists and business owners to public officials and parents, students and young professionals–came out to participate in a conference on progressive politics in the Armenian community. The event was an experiment to create dialogue regarding concepts and strategies that go beyond the conventional politics of the Armenian American community. 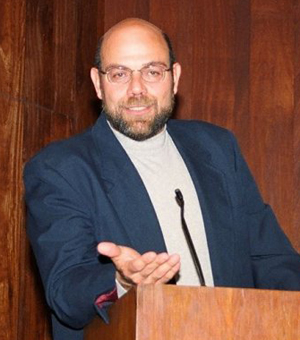 The West Coast Armenians and Progressive Politics conference was organized by a special committee of the ARF Western US. The committee began putting together the symposium several months ago as a result of successes in similar conferences organized in 2006 and 2007 by the ARF Eastern US and ARF Argentina. According to the organizers, the goal of the conference was to create a forum for Southern California’s Armenian American Community to discuss and debate the pressing challenges our generation faces today.

“Social justice movements are clamoring to be heard above the din of the media giants much like Armenians are struggling to have their very potent issues addressed,” commented Babken DerGrigorian after Saturday’s session. DerGrigorian, who is a founding member of the UCLA Chapter of the national movement “Students for a Democratic Society,” noted that if the revolutionaries of Armenia’s past were alive today, they would be progressive activists, fighting to bring an end to the war in Iraq and struggling with disenfranchised workers for their rights.

All of these issues, according to DerGrigorian, continue to affect a vast majority of the world’s population, including Armenians.

“As victims of social injustice ourselves, it’s important for the Armenian community to build solidarity with other social justice movements as a way of addressing the root causes of injustice.