For its Fall issue, the Armenian Youth Federation’s Haytoug publication sat down with Dr. Ara Khanjian for a candid discussion on the socio-economic realities in Armenia and how the nation could overcome the challenges that have relegated many of the country’s population to a life of poverty and social inequality. 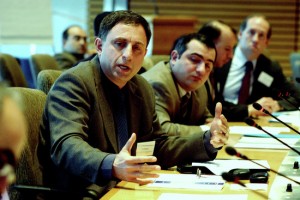 Haytoug: Armenia has been recording steady levels of economic growth and expansion for several years now. How much of this growth has trickled down to the average population and those at the very bottom of the economic totem pole?

Ara Khanjian: During the past ten years, when Armenia was experiencing a double-digit GDP growth rate, the official poverty rates went down significantly. In 1999, 56.1% of the population was officially considered poor. By 2006 that rate had dropped to 26.5%. However we have to make a few observations here.

First, there are regional disparities. A visitor to Armenia would realize that most of the improvement is occurring within the “getron” (center) of the capital, Yerevan. Outside the center of Yerevan, the improvemen’s are less visible and tend to be the poorest areas. In general, rural areas are doing better than the urban areas outside of Yerevan, because agricultural production is increasing and, during the past few years, agricultural prices were rising faster than non-food prices.

Second, it could be argued that the official poverty line is very low, and it underestimates the true amount of poverty in Armenia. In 2006 the poverty line was 21,555 dram per month, which implies that someone earning 22,000 dram ($73) per month would not be considered poor. However with 22,000 dram someone would have a very low standard of living and would be living in practical poverty.

Haytoug: What specific policies aimed at reducing poverty and increasing economic equality has the ARF-Dashnaktsutyun advocated or implemented since joining the coalition government?

A.K.: First we should emphasize a philosophical issue. The ARF-Dashnaktsutyun being a socialist political party does not believe in the Darwinian concept of the survival of the fittest or the law of the jungle, where the strong survive while the weak–such as the young, elderly and the unfortunate–perish. Therefore, poverty is a major concern of the ARF, while for other political parties poverty is a secondary issue, because they believe that the poor are responsible for their conditions and that they should improve their own economic situation.

The ARF-D is convinced that the government has an important role to play in generating an environment where the poor would have the opportunity to improve their standard of living. It is safe to claim that economic growth alone is not sufficient to reduce poverty in a country. It is essential for the government to adopt pro-poor economic policies. The ARF-D promoted the following pro-poor policies:

–Increase in the pension paymen’s.

–Increase in the minimum wage.

–Improve public infrastructure, such as rural roads and water resources.

This last point is considered an important factor. Corruption deteriorates the businesses environment and it slows down economic growth. Also corruption increases inequality. Armenia’should aggressively reduce the level of corruption.

Haytoug: The official political coalition agreement of the current Armenian government and much of the statemen’s coming from President Serzh Sargsyan acknowledge the need for the state to fight corruption, combat the shadow economy, promote jobs, reduce inequality, alleviate poverty, and so on. In your view, what are the prospects for the current coalition government to effectively tackle these socio-economic issues in Armenia and what role does the ARF-Dashnaktsutyun play in these efforts?

A.K.: With our focus on poverty, we were able to influence the government and make it more aware of the needs of the poor. During the opening ceremony of the ARF-D’s 30th World Congress, one of the first concerns mentioned by Prime Minister Dikran Sarkisyan in his speech was the fight against poverty. This was not a coincidence. Prime Minister Sarkisyan, knew that the ARF cares about the poor; therefore he explained to the ARF World Congress delegates that he also is concerned with the conditions of the poor.

In addition, the government of Armenia, similar to many other developing countries, with the cooperation of the World Bank, has adopted a Poverty Reduction Strategic Paper, PRSP, which is a long-term plan for reduction of poverty in Armenia.

Meanwhile the ARF-D was and still is arguing that the government could afford to generate a slightly higher level of budget deficit and could allocate the additional borrowed funds on education, health care, pension benefits and other pro-poor government expenditures.

Haytoug: How much of the disillusionment and dissatisfaction that exists in Armenia–as witnessed during the post-election turmoil in late February and early March–do you think is attributable to social inequality and real or perceived injustice in the economic sphere?

A.K.: Social inequality, high rates of poverty and real injustices in the economic sphere are causing significant amount of discontent. The almost annihilation of the middle class during the 1990s and the emergence of the very rich made people feel much poorer.

At the same time it seems to me that in Armenia the very rich are not hiding their substantial amount of wealth. Instead, they are showing it off and making the poor feel even worse. Also the rich and the powerful sometimes are violating the laws blatantly making the ordinary citizen feel even more helpless. For example, sometimes you will notice that a young person driving a luxury car in the streets of Yerevan is violating basic traffic laws arrogantly. In this sense it is essential to apply the law to everyone, including the rich and the powerful.

Recently we should note that, along these lines, there has been some reduction in petty bribery that traffic cops used to collect from ordinary citizens.

Haytoug: The Armenian government’s budget has reportedly seen a 35% increase in tax revenue in the first half of this year and the government has promised to increase spending on social programs as a result. How best do you think increased tax revenue should be used to alleviate economic hardships in Armenia?

A.K.: Even with such increases, the level of tax revenue in Armenia is still relatively very low. It is important that in the near future, the government of Armenia collects the correct amount of taxes from large enterprises.

In order to reduce the economic hardship of the poor in Armenia, government expenditures on education, research and development, health care, and rural infrastructure, such as roads, electricity, running water, schools, health clinics, etc., should increase.

Probably the top social spending priority should be on education, because an adequate type of education improves the potential for individuals to find jobs and be productive members of society. In general, historically speaking, when a socialist government comes to power in a developing country, one of the first major goals becomes improving the level of education, because education is the best way to reduce poverty.

Haytoug: Is there anything you would like to add in sum of our discussion on economic issues facing Armenia?

A.K.: Let me make a few suggestions and statements.

During this summer I had to read “the Jungle” by Upton Sinclair. It is the most famous socialist novel in the U.S. The novel is based on the conditions of the meat production industry in Chicago around 1905. I strongly advise you to read this novel. You will see the extreme poverty that existed in the U.S. at the turn of the century and how the system was so unfair. It took generations of socialists, union members and workers to fight and struggle in order to have the labor rules and regulations–such as coffee break, vacation time, eight hour work-day, safer working conditions, some amount of job security, retirement benefits, etc.– that we take for granted. None of these things existed one hundred years ago. We should appreciate them and be thankful to the past socialists and union members who struggled, and even died, in order for us to enjoy these working conditions today.

Each one of us should feel that it is our duty to take steps in order to generate a fair economic system, where poverty in Armenia is eliminated, where everyone has access to adequate level of education, health care, public transportation, child care, housing, adequate retirement, etc. and where everyone in Armenia has at least an acceptable standard of living.

This article is featured in the Fall 2008 issue of Haytoug, a quarterly publication by the Armenian Youth Federation of the Wetern United States, the ARF-d youth organization in the region.