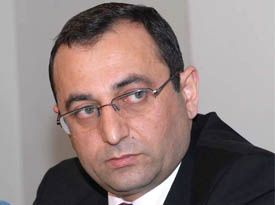 The Armenian Revolutionary Federation-Dashnaktsutyun could go as far as to pull out of Armenia’s governing coalition if the upcoming municipal elections in Yerevan are marred by “blatant” irregularities, the party’s top election candidate warned on Friday.

“We would not only make a statement not recognizing the election results but take many other actions,” Artsvik Minasyan, who was nominated by the influential party for the post of Yerevan mayor, told RFE/RL Armenian Service in an interview.

When asked whether a coalition exit is an option for Dashnaktsutyun, Minasyan said, “Of course it is now difficult to imagine what situation can lead to such a move. But everything will be possible if these elections follow a negative scenario.”

Minasyan already urged President Serzh Sargsyan earlier this month to publicly pledge that his Republican Party of Armenia (HHK) will not use its extensive government levers to win the polls scheduled for May 31. He echoed media reports that Yerevan’s incumbent Republican Mayor Gagik Beglarian and his subordinates are pressuring public sector employees to help the HHK win a majority in the new municipal assembly. Sarkisian did not comment on the Dashnaktsutyun concerns during his April 10 news conference.

Eduard Sharmazanov, the HHK spokesman, insisted on Friday that Armenia’s main governing party will do its best to ensure that the elections are held “without serious violations.” “The Republican Party has neither the need nor the ability or desire to rig the elections,” he told RFE/RL.

The HHK was accused of using its government levers and resorting to dirty tricks to win last year’s presidential election and the May 2007 parliamentary elections which Western observers described as flawed. It strongly denied any wrongdoing.

“We should not rule out that, as has often been the case, some people will try to pay lip service to one or another political force,” said Minasyan. “We should therefore jointly fight against pressure, ballot stuffing, attempts to distort election results and other violations that can significantly influence the real picture.” He said Dashnaktsutyun is ready to cooperate with all other election contenders, including the main opposition Armenian National Congress (HAK), to prevent such irregularities.