An Interview with Khatchig Der Ghougassian

Another world is possible: One where economics are based on justice, democracy is founded in principle, human rights are cherished and protected, and diversity is shared and celebrated. In an exclusive interview with Haytoug, Khatchik DerGhougassian, a professor of International Relations at the Universidad de San Andrés in Argentina, discusses the social, economic and political challenges plaguing the 21st century and, with a focus on Armenia, outlines the potential for progressive movements to radically and change the status quo for the better, both locally and globally. 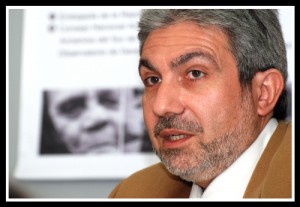 Q: Since at least the 1970s, the world has been undergoing a form of free-market economic integration commonly referred to as neo-liberal globalization. What is the extent to which Armenia itself has become a part of this process since its independence and what do you feel have been its main impacts on the country?

KhDGh: Armenia has fully embraced the neoliberal model. As in Russia— and, in fact, all of the former Soviet republics—it applied the “shocktherapy” approach to liberalize the economy and privatize everything. In the immediate aftermath of independence, more precisely between 1991 and 1994, the parliamentary faction of the Armenian Revolutionary Federation (ARF) argued for an alternative approach, advocating for a gradual liberalization and a central role for the state in strategic decisions, as well as healthcare, education and social security. It was consistent with the ARF’s other main objective concerning the Constitution: creating a parliamentary system rather than the risk of concentrating too much power within the hands of the executive through a strong presidency.

The debate ended with the crackdown on the ARF by the end of 1994, a move that was necessary to open the way for the implementation of the “shock-therapy” model and a strong presidential system. The result has been a twofold concentration of wealth: geographical and oligarchic/monopolistic. The central perimeter of Yerevan is a developed urban zone with a high standard of living, whereas the periphery of the city (not to mention outside of Yerevan) is almost completely underdeveloped— with here and there extravagant residences usually built by the new capitalist class, Diaspora Armenians, or some wealthy person living in Russia. This is the typical landscape of the so-called “creative destruction” type capitalism which was applied. And, indeed, as a consequence of the “shock-therapy” style privatization, a small oligarchy has become virtually the owner of the country.

The country’s economic policy follows closely to the orthodox guidelines of the International Monetary Fund and the World Bank, maintaining a straight fiscal discipline. Social concerns, including jobs, are non-issues as the free-market dogmatic belief is that growth is the magical solution to every challenge. The main objective of the Central Bank of Armenia is to ensure the flow of money, the only bloodline for the economy. This is broadly how Armenia became “part” of neoliberal globalization.
The tragic part is that once the model had been implemented successfully and structured the economic system, no real critical or alternative thought emerged. It seems as if everyone accepted it as the only possibility. Of course, Armenia’s bubble economy and double-digit—or at least high-level—growth from 2002 to 2008 could have been the main cause of this; while certainly no one predicted its inevitable decline (if not crash), at least not as strongly as to start formulating an alternative approach and build consensus and public support. No one really cared about the unfair income redistribution, the growing social discontent, the precarious conditions in the job market, the heavy dependence on remittances, the lack of value-added production, and the despair of the educated youth seeking to emigrate in hopes of finding a decent job and future.

Moreover, when the global financial crisis broke in September 2008, government officials in Armenia publicly expressed their faith in the strength of the Armenian economy, which was, supposedly, pretty well protected against the impact of the crisis. We are now witnessing how the crisis is strongly hitting Armenia and, yet, the measures taken to face the crisis are exactly the same ones that are at the root of the current debacle.

Q: What sort of effect, if any, do you feel the current process of globalization is having on the Armenian Diaspora? How do you feel we can properly adapt to these changes associated with globalization and move forward more effectively into the 21st century?

KhDGh: The Diaspora has always been a global reality. Nevertheless, up until the late 1980s, the dominant narrative of Diaspora awareness was the conviction that, as the phenomenon did have a start—the Genocide—then it necessarily should also have an end—going back home. In this sense, I think that perhaps the most important impact of globalization on the Diaspora has been the emergence of a new Diaspora awareness based on a different narrative; one that accepts this transnational reality as a strong, and perhaps a strategically necessary one.

But I would say that globalization came as a later impact; the reality of the Diaspora underwent a structural change earlier, in the late 1970s and early 1980s, with the massive immigration of Armenians from the Middle East—Lebanon, Syria and Iran— to the West—Europe, Canada and the United States. This “westernization” of the Armenian Diaspora gave a strong blow to the old center-periphery frame of the Diaspora, whereas the hope, or myth, of returning to the homeland vanished in the air with the independence of Armenia. We are still trying to rationalize this structural change.

We’ll see if anything practical will actually come out of it.

Q: Over the last two decades, the world has also seen the growth of an active global justice movement struggling against the damaging effects of neo-liberalism. Participants in this movement come together in gatherings such as the World Social Forum (WSF) which you have participated on behalf of the ARF. Can you tell us a little bit about your experience at such gatherings, and why you think it is important for Armenians to engage ourselves in this broader global justice movement?

KhDGh: The interest for the WSF emerged during the ARF Bureau’s July 2002 seminar in Yerevan aimed at designing and implementing a socialist program in Armenia. But it wasn’t until January 2005 that, for the first time, a joint Armenian National Committee-Armenian Youth Federation delegation with ARF and AYF members from Armenia, California, Argentina and Brazil participated in the WSF in Porto Alegre, Brazil. The following year, in 2006, a delegation from Argentina and Brazil went to Caracas, Venezuela where the Forum was planned to take place. AYF delegations also participated in regional forums in the Americas and Europe.

The experience was very rich and important. Unfortunately, we failed to reach the wider circles of the AYF and ARF to convince them about the importance of continuing such contact. Nor were we able to create a space of our own in the WSF, despite that in both Porto Alegre and Caracas the issues that we put forward—Genocide, Karabagh and Javakhk self-determination, social justice in Armenia, etc.—generated a great deal of interest and received support from known intellectuals and militants.
This may be because the WSF is mostly a Global South phenomenon—Latin America, Africa, some Middle Easterners, and India/South Eastern Asia, with an important intellectual/ militant input from progressive sectors in Europe, Canada and the US—and that Eastern Europeans and former Soviet Union countries, including Armenia, find it too distant from a conceptual perspective. It is a pity because the “other world” that the WSF aims at is precisely where Armenia needs to see itself in order to start thinking about a radical reform of its deeply unfair and expulsive social order, the political institutions that perpetuate and legitimize this order, and the economic infrastructure that sustains and recreates it.

Q: What can Armenian activists learn from mass movements in Latin America, where we have seen in recent years a rise in popular mobilization, empowerment of marginalized groups, and electoral victories for candidates who reject the policies of neo-liberalism?

KhDGh: The widely known “left-turn” phenomenon in South America is a very rich and ongoing experience that Armenian activists should study. They should study the way parties and social movements built alliances, worked first to build a wide social consensus for their program and then rose to power through a vast majority vote; the way social safety nets were constructed in order to face economic hardships after the collapse of the neoliberal model; the way workers occupied abandoned industrial plants and started to produce in a cooperative manner; the way private multinational companies came under scrutiny for investment promises they made but failed to accomplish; the way the doors were shut to the IMF and its policies; the way private and public capital created highly successful companies; the way the social agenda received priority; the way nationalization stopped being synonymous with failure; the way the power of the people stopped the privatization of their country’s natural resources; the way zerohunger became an objective and food security programs were designed and implemented. All of these and many other developments have already generated a vast literature, documentary movies, research programs and so forth that Armenian activists should study to produce a critical/alternative thinking about the dominant, and failing, neoliberal model.

The most important characteristic of the South American “leftturn” is the commitment to democracy. Change took place peacefully, without military intervention, and without a call for arms or revolutions as was usually seen in the past. It is the power of the people that allowed South American leaders to implement long-term radical reforms, the aim of which ultimately would be to replace the dominant model of the Market Economy with the alternative model of the Working Society.

Armenia needs a radical reform of its political, economic and social system, including a constitutional shift to a parliamentary regime, progressive taxation to promote wealth redistribution and laws protecting jobs, insuring universal healthcare, education and social protection; not some so-called “color revolution,” whatever that means.

Khatchik DerGhougassian is a professor of International Relations at the Universidad de San Andrés in Argentina, and a Visiting Professor at the American University of Armenia in Yerevan.

This article is featured in the Summer 2009 issue of Haytoug, a quarterly publication by the Armenian Youth Federation of the Wetern United States, the ARF-d youth organization in the region.