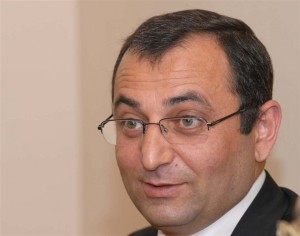 A senior member of the Armenian Revolutionary Federation (Dashnaktsutyun) criticized the government’s economic policy on Thursday, saying that it has failed to minimize the impact of the global recession on Armenia.

The criticism coincided with the release of fresh statistical data that shows a further deepening of the country’s worst economic crisis since the early 1990s. According to the National Statistical Service (NSS), the Armenian economy contracted by 18.5 percent year on year in the first seven months of this year.

The NSS had registered a GDP decline of 16.3 percent in the first half of 2009. Armenian officials have said that the recession will ease in the second half thanks to wide-ranging anti-crisis measures taken by the government in recent months.

Prime Minister Tigran Sargsyan predicted on August 5 that GDP will likely shrink by 12 percent in 2009. Deputy Finance Minister Vartan Aramian made a similar forecast on Wednesday.

But Artsvik Minasyan, an economist and parliament deputy affiliated with Dashnaktsutyun, came up with a more pessimistic scenario, predicting a full-year decline of about 20 percent. He described the government’s anti-crisis policy as inadequate and called for its revision.

“Using a five-point scale, I would give two points to the government’s anti-crisis policy,” Minasyan told a news conference. “I believe that it is still not too late to realize that we should accept recommendations of international organizations to the extent that they help us build a national economy,” he said in a jibe at the Armenian government’s close cooperation with Western lending institutions.

Both the International Monetary Fund and the World Bank have disbursed this year hundreds of millions of dollars in emergency loans to help Armenia cope with the recession. They have largely endorsed relevant measures taken by the authorities in Yerevan.

Minasyan did not elaborate on specific policy changes which he and his party believe should be made by the government. He said only that the government should raise public sector salaries and improve tax collection.

Dashnaktsutyun was represented in Sargsyan’s cabinet by three ministers until the end of April. The party pulled out of the ruling coalition in protest against President Serzh Sargsyan’s conciliatory policy towards Turkey.