Conference co-organised by the European Forum for Democracy and Solidarity, the S&D Group in the European Parliament and the Party of European Socialists (PES) 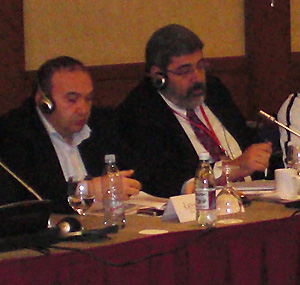 I wish to thank you for inviting us to this very important conference and special thanks for the hospitality.

Following its independence, Armenia — like almost all of the former Soviet republics — fully embraced the neoliberal model. It applied the “shock-therapy” approach to liberalize the economy and privatize everything. In the immediate aftermath of independence, the Armenian Revolutionary Federation-Dashnaktsutyun argued for an alternative approach, advocating for a gradual liberalization and a central role for the state in strategic decisions, as well as healthcare, education and social security. It was consistent with the ARF’s other main objective concerning the Constitution: creating a parliamentary system rather than the risk of concentrating too much power within the hands of the executive through a strong presidency.

The debate ended with the crackdown on the ARF by the end of 1994, a move that was necessary to open the way for the implementation of the “shock-therapy” model and a strong presidential system. The result has been a twofold concentration of wealth: geographical and oligarchic/monopolistic. The central perimeter of Yerevan is a developed urban zone with a high standard of living, whereas the periphery of the city (not to mention outside of Yerevan) is almost completely underdeveloped. As a consequence of the “shock-therapy” style privatization, a small oligarchy has become virtually the owner of the country.

In subsequent years, the country’s economic policy followed closely the orthodox guidelines of the International Monetary Fund and the World Bank, maintaining a straight fiscal discipline. The free-market dogmatic belief that growth is the magical solution to every challenge has been the guiding ideology of the ruling circles. The unfair income redistribution, the growing social discontent, the precarious conditions in the job market, the heavy dependence on remittances and the lack of value-added production became the norm.

Whenever the ARF-Dashnaktsutyun was part of the governing coalitions, it tried, with some but not enough success, to change this trend. While in a governing coalition and as a precondition to joining such a coalition, our party has always pursued the inclusion of at least several of our socio-economic and democratic policies into the coalition’s program and we have tried to accomplish those while in the coalition. A case in point is the government’s goal of privatizing the pension plans. Initiated several years ago by the Central Bank, the justification for this change is to finance the country’s capital markets. As part of three governing coalitions and being in charge of the social affairs and labour ministry, the ARF-Dashnaktsutyun was able to delay but not stop such drastic and unacceptable change. And as soon as we left the coalition, the government decided to implement this plan starting in January 2011. Our position is that the focus of any pension system should be the well-being of senior citizens and not promoting and generating the financial markets of the country by risking the retirement pensions.

As in other former Soviet republics, in Armenia too the fine line between business interests and politics has become invisible. Business and politics go hand in hand. Businesspeople have made their fortunes and maintained direct involvement in the political life of the country.

The growing polarization between the rich and the poor, rampant corruption, falling birth rates, monopolies, oligopolies … are the challenges we have to confront in order for Armenia to prosper.

The problem with strengthening social democracy in Armenia, as in the whole of the South Caucasus region, is the deficit in democracy itself. Starting in 1992 and continuing ever since, freedom of the media, free, fair and transparent elections, freedom of political assembly has come under attack. In the last presidential elections in early 2008, both the authorities and the extremist opposition, itself the initiator of the curb on democracy when it was in power, through their irresponsible actions created an atmosphere, which resulted in the tragic events of March 1st, 2008.

In October of last year, the ARF-Dashnaktsutyun unveiled a detailed plan, called a “roadmap to regime change.” Our party declared that for Armenia to persevere and survive, fundamental changes are needed to its socio-economic, political, and governmental structures. These changes are to ensure the pursuit of a national agenda.

The plan provides guidelines for reforms in social, electoral and economic structures, as well as for foreign policy issues. For us, regime change has a broader meaning than just the change of the person of the president. The country has deviated from its course and everything must be changed, with full respect to the country’s Constitution and laws.

Taking into consideration the imperative to confront the foreign and domestic challenges and dangers that have arisen as a result of the existing situation, the blueprint of our political agenda priorities include:

The ARF-Dashnaktsutyun’s conviction is that domestic stability can only be based on social justice and freedom for all. As such, the government’s role as an initiator and administrator must be reorganized through the establishment of a social policy that guarantees the creation and just distribution of wealth. The following are the main socio-economic targets:

n  radical reforms in healthcare to insure free quality service for all ;

n  establishing an economic structure based on social justice and security, trade incentives and fair competition.

b)      The political priorities include:

n  elimination of the plutocracy — oligarchy — in the country and strengthening democracy through structural and constitutional-legal reforms;

n  creation of a favourable climate for democratization by waging active struggle against corruption through an independent anti-corruption agency led by the opposition and supported by a wide public front and a self-sustaining civil society;

n  guaranteeing freedom of speech and opinion, especially through the politically balanced formation of the public broadcasting regulatory and governing bodies and the transparency of their work;

n  creation of a 100% proportional parliamentary election system (now it is a mix of proportional and majoritarian system);

n  complete reform of the electoral system, including the creation of an independent elections agency to organize the elections, to ensure the participation of citizens and to stop election bribes;

n  The use of euro-integration processes to attain these goals.

In order to refine these policies and to create public interest in them, we are holding public discussions on them through conferences with the participation of international partners. The first of these conferences was held just in the last two days.

Another initiative by the ARF-Dashnaktsutyun aimed at facilitating the public discussion of these policies is the establishment of the Hrayr Marukhian political foundation, which will soon commence its work in cooperation with other social democratic foundations.

Presently, Armenia is in a crisis of managing the economy. The problems are increasing at a much faster pace than they are being resolved.  The buying power of the consumers is decreasing, while the inflation is increasing out of control.  The government’s anti-crisis program is not effective. Not only there is no fight against monopolies, rather the economy of the country is in fact based on those monopolies. The Minimum Consumption Basket is not being calculated to hide the real size of poverty. As a result of all this, emigration has increased.

The Armenian Revolutionary Federation-Dashnaktsutyun is determined to bring about the systemic change it sees unavoidable in order to secure the survival and development of Armenia. It is our belief that “the ideals of socialism are unattainable without democracy, and democracy is incomplete and lacking without socialism.” (ARF-Dashnaktsutyun Programme, 1998)