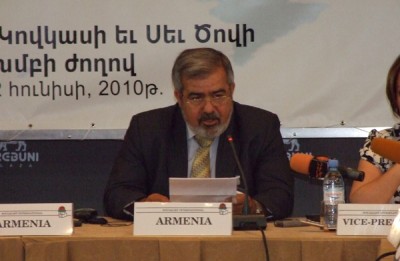 As members of the same large ideological family, we have much to do in our region and I am convinced that our coming together in Yerevan will contribute to the success of our work.

The decision to host a regional committee meeting in Yerevan was taken over five years ago. However, the actual implementation of this decision was fraught with many difficulties. The fact that we are holding this meeting in Yerevan is proof that many of those obstacles have been overcome. Luis Ayala, the Secretary General of Socialist International, has been very instrumental in overcoming these challenges and we want to thank him for all his efforts.

One of the significant achievements of this meeting was to be the participation of our immediate neighbors from Georgia and Azerbaijan. Unfortunately, for reasons we don’t know yet, the delegate from Azerbaijan has not yet arrived in Yerevan. Of course we are still facing an unresolved conflict with Azerbaijan. However, this should not serve as an impediment for members of the same ideological family not to talk to each other. When political parties that struggle for justice engage in dialogue, it can only help the process of finding a resolution to the conflict. So we were prepared to welcome the Vice President of the Social Democratic Party of Azerbaijan here, however for reasons which are not yet clear, we have been deprived of this opportunity.

Georgia is closely related to the history of our party. Our party was established in Tbilisi 120 years ago, and on May 28, 1918 the declaration of the establishment of the first independent Republic of Armenia was made from Tbilisi. However, our relationship with Georgia has not always been easy. There have been some historical developments that have left their mark on our relationship; there are instances of mutual distrust. However, for the benefit of our two nations and countries, we have to overcome those problems and we can do this through dialogue. It is with this hope that I would like to welcome the representatives of the Social Democratic Development Party of Georgia and the Georgian Labor Party to this meeting.

We would also have wanted to welcome the representatives of the parties that are struggling for justice in Turkey, which, we believe, will happen in the near future.

While welcoming and underscoring the importance of your presence, let me also greet the representatives of a number of parties.

We have an agreement of cooperation with the Just Russia Party, which we believe will have an impact on the development of bilateral relations between our two countries.

I would like especially to welcome the representative of the Palestinian Fatah Party here. During recent months and especially in recent weeks, some circles have been trying to place a wedge in the Armenian-Palestinian relationship; two nations that have a similar destiny and history. Armenia has been blockaded for 17 years and those who blockade Armenia speak against the blockade undertaken by others and they try to deport people from their country – it is not possible to ignore the dishonest and hypocritical position of these circles. There are also other powers, who, taking advantage of the political situation, try to turn the issue of the recognition of the Armenian Genocide into a political bargaining chip. Fortunately, on both sides, there are people who call for vigilance and prudence and in cooperation with them, we will be able to overcome together the obstacles that we face and the challenges that are ahead of us. It is for this reason that the participation of the Palestinian party here is very important.

We consider the participation of representatives from the socialist parties of Greece, Germany and other European countries as very important and as a means to deepen our relationship with these parties.

In the agenda we will reflect on political and economic issues in Armenia and the efforts we have made to introduce socialist ideas into the Armenian reality. I would like to stress that the Armenian Revolutionary Federation-Dashnaktsutyun has been a socialist party from the first day of its establishment, when the objective was to liberate the Western Armenians in the Ottoman Empire. So, for the ARF-Dashnaktsutyun, the struggle against oppression and for justice has always been fundamental. We have always fought for social justice and our history stands as a witness to the fact that the aggressors are usually the foreign rulers that have even commited genocide. That is why our struggle has also had a national character. However, for the ARF-D “every idea of national supremacy and every instance of nationalism are expressions which hamper the natural development of society.” (ARF Program, 1998)

Today, in our own independent country, we continue to fight against oppression, for justice, based upon socialist principles. The Armenian Revolutionary Federation-Dashnaktsutyun “believes that the ideal of socialism is not possible without democracy, and democracy is weak and limited without socialism.” (ARF Program, 1998)

In our region, socialism has historical roots. However decades of Soviet history deviated socialism from its roots. Today, the possibilities are great to begin work upon socialist principles. Similar possibilities and needs are present within each state and within bilateral relations. The need for cooperation is great for parties that work within this region as well as outside of the region with the objective to share experiences and nurture mutual trust. With this purpose, we have established the Hrayr Maroukhian Foundation and for the success of the programs by the foundation, we rely on your support.