In 2014, Armenia will entirely switch to an accumulated pension system. Last week, the bill on “State Pensions”, which comprises of pension reforms, was discussed and passed with first reading at the special session of the National Assembly. According to the draft bill, in 2011 the voluntary option of the accumulated pension system would come into force, with the compulsory one starting three years later. 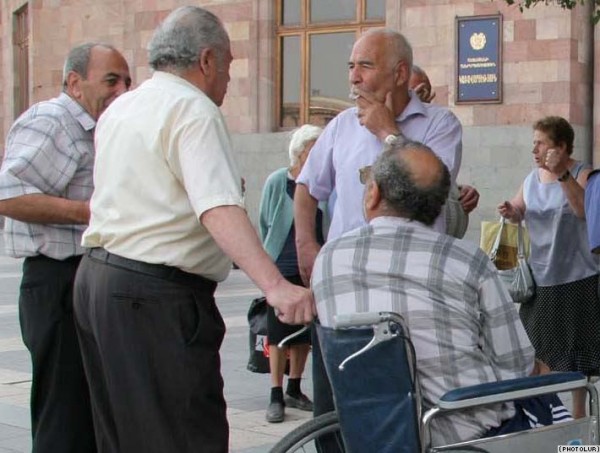 Pensioners protest outside the main government building in Yerevan, undated.

The government of Armenia is proposing radical changes in the pension system. The proposed changes are extreme because 100% of employee pension contributions will be allocated in private individual pension accounts, which will be invested in stock and bond markets. After a transition period of about 25 years, every employee will be part of this extreme pension model. Out of about two hundred countries in the world only a few countries, mainly Chile, Kazakhstan and Kosovo, have such an extreme system.

Another problem of the government’s proposal is that a pension system based on private accounts requires developed and transparent financial markets and institutions, competent managers and efficient regulations and regulators. Unfortunately, in the case of Armenia, all of these are lacking and at the same time there is a significant amount of corruption, which makes the adoption of a private pension system riskier. During October 2008, even the IMF and the World Bank experts advised the government to “reformulate” the pension changes proposed by the government in order “to reduce risk and improve sustainability.” The main characteristics of the current government pension proposal are similar to the proposal presented during 2008.

Armenia, similar to many countries in the world, is facing the problem of an aging population, which could increase the cost of maintaining a pension system. Therefore it is important for us Armenians to discuss and figure out the best pension system that would deal with future demographic problems and which at the same is fair and sustainable. There are many possible alternatives, such as national or public, private, mix private and notional, etc., pension systems to the existing pension model.

Finally, in many Western countries, such as Sweden and the U.S., a political party with a majority of the seats in the parliament avoids imposing its will on the country and adopting radical changes in the pension system because in few years another political party could acquire a majority of seats in the parliament and it could introduce another radical change in the pension system. Pension reforms affect every citizen of the country and changes are costly; therefore they should be adopted through significant amount of national debate and if possible, a consensus.

The whole country should discuss and debate different options, such as public, private and mix pension systems. A non-political, professional state agency, such as the National Statistical Service, should initiate simulations and actuarial analysis of different pension options and present the results to the parliament and the public for debate. Only then Armenia should adopt a new pension system.