We, the Presidents of the OSCE Minsk Group’s Co-Chair countries, France, the Russian Federation, and the United States of America, reaffirm our commitment to support the leaders of Armenia and Azerbaijan as they finalize the Basic Principles for the peaceful settlement of the Nagorno-Karabagh conflict.

We welcome as a significant step the recognition by both sides that a lasting settlement must be based upon the Helsinki Principles and the elements that we proposed in connection with our statement at the L’Aquila Summit of the Eight on July 10, 2009, relating to: the return of the occupied territories surrounding Nagorno-Karabagh, interim status for Nagorno-Karabagh guaranteeing security and self-governance, a corridor linking Armenia to Nagorno-Karabagh; final status of Nagorno-Karabagh to be determined in the future by a legally-binding expression of will, the right of all internally-displaced persons and refugees to return, and international security guarantees, including a peacekeeping operation.

Now the Presidents of Armenia and Azerbaijan need to take the next step and complete the work on the Basic Principles to enable the drafting of a peace agreement to begin. We instruct our Ministers and Co-Chairs to work intensively to assist the two sides to overcome their differences in preparation for a joint meeting in Almaty on the margins of OSCE Informal Ministerial. 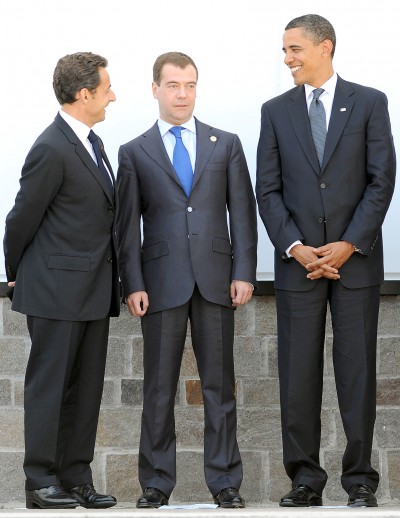 YEREVAN — The statement on Karabakh issued by the presidents of France, the US and Russia over the weekend is a direct message to Armenia urging concessions and reflects only the interests of Azerbaijan, said Armenian Revolutionary Federation parliamentary bloc chairman, Vahan Hovhannesyan in an interview with Yerkir on Monday.

He explained that the statement, made at the G8 summit in Canada, appeases Azerbaijan by calling for the “withdrawal from occupied territories,” and leaves the final solution to Karabakh’s status nebulous at best.

Hovhannesyan also expressed surprise at the immediate embracing of the statement as a positive step in the peace process.

“I am surprised at what is our foreign ministry expressing its support? What in this announcement has satisfied him,” asked Hovhannesyan, who pointed out inconsistencies between the Russian and the English versions of the statement.

Hovhannesyan explained that the Russian text clearly states that the status of Karabakh will be chosen by its residents, while the English version does not draw that distinction.

He said foreign ministry spokesperson Tigran Balayan had expressed that “the same conclusions can be derived from both versions by the foreign minister.”

Madrid Principles Not a Basis for Viable Peace Agreement

YEREVAN — On June 26, Russian President Dmitry Medvedev, U.S. President Barack Obama, and French President Nicolas Sarkozy issued a statement from the G8 Summit being held in Muskoka, Canada, encouraging the leaders of Armenia and Azerbaijan to “finalize the Basic Principles for the peaceful settlement of the Nagorno-Karabagh conflict.”

“The main shortcoming of the joint statement is that it completely disregards the aggression by the Azerbaijani forces, thus sending the wrong message to official Baku that such behavior will not only be tolerated, but even disregarded by the international community.

“The joint statement considers the ‘Madrid Principles’ as a basis for the resolution of the conflict; we, the Dashnaktsutyun, do not consider these principles as basis for a viable peace agreement because they disregard developments following 1988. Had Soviet Azerbaijan responded positively to the demands of the Nagorno (Mountainous) Karabagh Autonomous Region in 1988, then these principles could have been basis for the resolution. But, Azerbaijan responded violently, attacked Artsakh, and lost the war it had started. Now to expect the Armenian side to compensate Azerbaijan for its losses as a result of a war it started is unrealistic and, if implemented, would only cause more violence and instability, because the only reason Azerbaijan has not carried out a full-scale attack is because the present borders don’t allow it to. Any change in those borders would only encourage Azerbaijan to carry out attacks on the Republics of Armenia and Mountainous Karabagh.

“The second major development that the ‘Madrid Principles’ disregard is the fact that the people of Karabagh have twice expressed their will, during the 1991 and 2006 referenda, to live independent of Azerbaijan, so there really is no need for a third exercise of ‘expression of will.’ It is interesting to note that there are differences between the English-language version of the joint statement posted on the White House site and the Russian version text posted on the Kremlin site. One of these discrepancies deals with ‘the return of the occupied territories surrounding Nagorno-Karabagh.’ In the Russian version, the ‘occupied’ qualification does not exist, just as it did not exist in the presidents’ joint statement of last year (July 2009). Also, the presidents seem to confuse the term ‘Nagorno (Mountainous) Karabagh’ for the ‘Nagorno Karabagh Autonomous Region’ when they speak about ‘surrounding territories.’ All surrounding territories are Mountainous Karabagh, geographically speaking. And, legally speaking, those territories are part of the Mountainous Karabagh Republic.

“I believe this statement is counter to Armenia’s national interests. Contrary to that, I think official Yerevan praised this statement only because it no longer talks of ‘an updated version of the Madrid Document of November 2007,’ to which the presidents of the co-chair countries of the OSCE Mink Group referred in their previous joint statement on the matter, on July 10, 2009. In recent months, it had become clear that Armenia does not accept this ‘updated version’ as a basis for negotiations, as it does the original Madrid Document.

“Finally, one reason this statement was made at this time, I think, is the active campaign by Turkey with the co-chair states, namely the USA, France and the Russian Federation; and Turkey is able to carry out such a campaign because of the Armenia-Turkey protocols, which are alive in spite of the fact that Turkey and Armenia, the first practically and the second formally, halted the process of their ratification. And this is one more reason why Armenia should recall its signature from those protocols.”