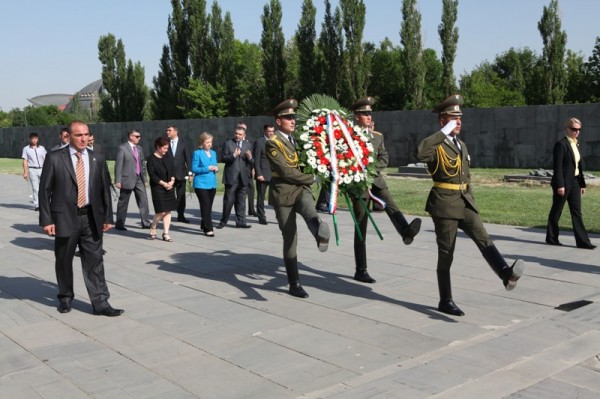 A 'private' visit by the US Secretary of State to the Genocide Memorial, accompanied by the honor guard

On the final leg of her five-nation tour of Eastern Europe and the South Caucasus U.S. Secretary of State Hillary Clinton paid an official visit to Armenia, becoming the first U.S. secretary of state to visit the country in over 18 years.

During her visit, Mrs. Clinton urged Armenia and Azerbaijan to finalize a framework agreement to resolve the Mountainous (Nagorno) Karabakh conflict while condemning threats to end the conflict by force. “The United States remains committed to a peaceful resolution based on the Helsinki Principles of non-use of force or threat of force, territorial integrity and the equal rights and self-determination of people,” Clinton stated at a joint news conference with Armenian Foreign Minister Edward Nalbandian.

The worst Armenian-Azerbaijani ceasefire violation in Karabakh since 2008 was reported on the night of June 18 when four Armenian troops and one Azerbaijani soldier were killed in an Azerbaijani commando raid on a Karabakh Armenian outpost in the north of the MKR.

Clinton said she expressed her concerns to both Aliyev and Sargsyan about this and other “unacceptable violations of the 1994 ceasefire agreement” that stopped the Armenian-Azerbaijani war. “The United States strongly condemns the use of force or the threat to use force,” she stressed.

Aliyev and other Azerbaijani leaders regularly threaten to win back Mountainous Karabakh by force if the long-running peace talks yield no results soon.

The deadly firefight occurred the day after Aliyev and Sargsyn held talks in Saint Petersburg, Russia, hosted by President Dmitri Medvedev. According to the Kremlin, the two leaders narrowed their differences of the basic principles of a peaceful settlement that were first formally proposed to them by the mediating powers in Madrid in November 2007.

Armenian officials say Medvedev presented the two presidents with new proposals. Nalbandian referred to them as “a new variant of Madrid principles.” He confirmed he and Azerbaijan’s Foreign Minister Elmar Mammadyarov will meet to discuss it in greater detail later this month.

Hrayr Karapetyan, member of the ARF-D faction in the National Assembly and chair of the parliamentary commission on defense, national security and internal affairs said that it was difficult to evaluate or draw conclusions about the visit because of a lack of information regarding the meeting of the Secretary of State with the country’s highest leadership.

“We were waiting for Armenia’s Foreign Affairs Minister Edward Nalbandian to relay, in an open way, what issues were raised during his meeting with the U.S. Secretary of State, however that did not take place,” noted Karapetyan.

The ARF-D parliamentarian went on to say that he was disappointed by the statements made by the US Secretary of State with regard to the Karabakh conflict, taking into consideration that it was the Azerbaijani side that organized the commando raid and that it has been President Aliyev of Azerbaijan who has been making threats to reignite the war. “In her statements, the Secretary of State did not direct any concrete accusations towards that country,” Karapetyan said and noted that Clinton did not shed any further light on the joint statement issued by Obama-Medvedev-Sarkoszy at the G20 Summit in Toronto. “Therefore, there is no reason to rejoice about the US Secretary State’s arrival and visit to Yerevan,” concluded Karapetian. 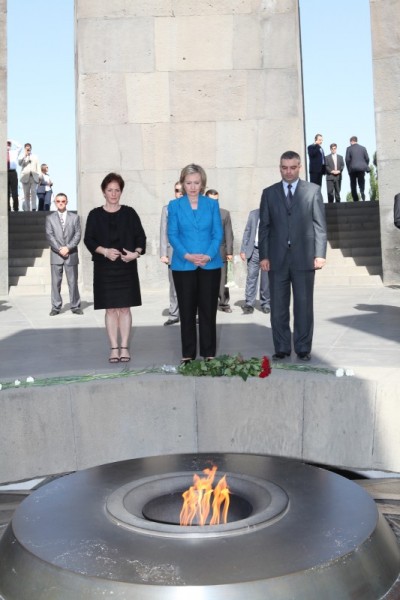 The US Secretary of State (center) pays her respects to the 1.5 million victims of the Armenian Genocide

In her statements, Hillary Clinton had said that they supported the Armenian President’s initiation of talks with Turkey. The ruling party’s spokesman, Edward Sharmazanov stated, “We knew very well that the United States administration always supported the Armenian president’s pro-active policy of establishing relations with Turkey without precondition. This was a gesture to the Armenian authorities. I think this was also a message to Turkey to the effect that the U.S. supports Armenia on this issue and agrees with Armenia’s view that Turkey is not constructive and is speaking with preconditions,” added the ruling party spokesman.

Another senior representative of the ARF-D Giro Manoyan suggested that the Secretary of State’s statements were aimed at making sure that Yerevan does not rescind its signature from the Turkish-Armenian protocols signed last October.

Manoyan also reiterated the ARF-D’s criticism of Clinton’s failure to describe the 1915 mass killings of Armenians in Ottoman Turkey as genocide during what the U.S. Embassy in Armenia called a “private visit” to the Tsitsernakaberd genocide memorial in Yerevan. Manoyan said: “There seems to be some contradiction between what the US Embassy is Yerevan has announced about her (H.R.Clinton) visit to the Genocide Memorial and what’s written on the wreath that she placed there. In any event, if Hillary R. Clinton did not visit the Armenian Genocide Memorial in her capacity as the US Secretary of State, then the US Secretary of State has insulted Armenia and the Armenians for not doing so. If, as the writing on the wreath says, she visited in her capacity as the US Secretary of State, then it either means that the Obama Administration has changed it’s policy and will agree to have the US House of Representatives pay its respect to the victims of the Armenian Genocide or the Secretary’s visit to the Genocide Memorial is not an honest expression of respect. In all cases, the US Administration has to clarify at least to the people of Armenia what her visit to the Genocide Memorial means.”