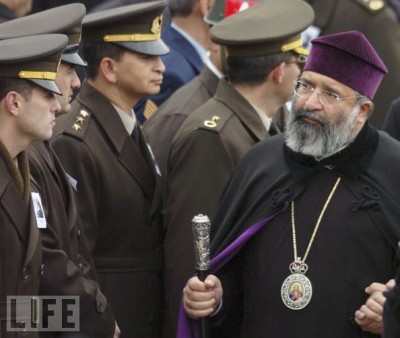 Some segments of the Turkish Armenian community are uneasy about the appointment of a general deputy patriarch instead of electing a new patriarch to replace seriously ill Patriarch Mesrob Mutafyan, or Mesrob II.

The uneasiness has been brought to the agenda by Taraf daily columnist Markar Esayan and the Turkish-Armenian weekly Agos, which has been debating the issue in detail in its pages since discussions started within the community. Agos published an editorial about the subject this week.

The anxiety started with the serious illness of Patriarch Mutafyan, 54, who has been diagnosed with dementia. According to the Agos weekly, the patriarch’s condition was not disclosed to the public by the patriarchate’s Spiritual Board, but months later the Spiritual Board declared that elections might be held to elect a new patriarch.

Esayan told Today’s Zaman that in order to hold the elections, first an election board has to be formed according to the traditions and regulations governing the patriarchate, some of which date back to 1863.

“This election board is responsible for the election of six civilian delegates by the people. These delegates and one representative from the Spiritual Board elect the new patriarch. This is the usual pattern that has to be followed, but it was not adhered to,” Esayan said.

According to him, tradition dictates that the patriarch has to be elected for life and Patriarch Mutafyan is still alive, although his illness does not afford him the ability to continue his duties and as the medical reports point out, there is no possibility of a cure.

This situation complicated the issue. The election board applied to the İstanbul Governor’s Office to hold the elections, but at the same time the Spiritual Board in a separate application applied to the governor’s office to elect a co-patriarch, since Patriarch Mutafyan is alive.

The İstanbul Governor’s Office did not take into consideration the application from the election board but at the same time refused to allow elections for the co-patriarch to go ahead, claiming that such a post does not exist. Instead, in a letter to the patriarchy on July 1, the governor’s office suggested the appointment of a deputy general who will be able to ensure the continuation of the religious needs of the community.

After receiving the letter from the governor’s office, the Spiritual Board appointed Aram Ateşyan as Patriarch Mutafyan’s deputy. Ateşyan will be responsible for the religious affairs and charitable organizations of the Turkish Armenian community and will be allowed to wear religious attire in public, a right defined by the law. Esayan said that in the Armenian Church, a deputy general patriarch is not part of tradition and that due to disagreements the community was unable to elect its own patriarch.

“There were two applications from the community, and the government did not want to take sides and so suggested a third option. In addition, the legal position of the patriarchy is vague, and this is a deliberate attitude of the state. We don’t have modern by-laws to apply. The community has the right to elect its own patriarch but was not able to use this right, this time. The community was not able to reach a consensus, and the government instead of helping to reach one, chose the easy way,” he told Today’s Zaman.

He added that the community was excluded from the election of a new patriarch and that “unfortunately, for the elections, we have to wait for Patriarch Mutafyan to pass away, and this is definitely not a pleasant situation for the community.”

Agos in its editorial this week under the title of “No to a patriarchy without a patriarch” criticized the Spiritual Board and wrote that the community feels cheated.