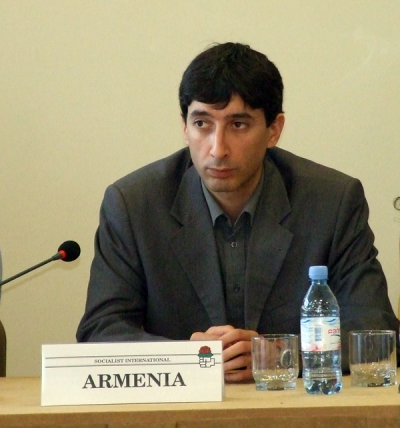 Ara Nranyan, ARF-D parliamentarian and member of the ARF-D Supreme Council of Armenia, spoke about the Armenian government’s forecast of the current economic conditions of the country in an interview with the Hayastani Zrucakic newspaper, published in the September 10 issue of the weekly. While the authorities have made an effort to illustrate growth in all sectors of the economy, ordinary people have yet to feel a sense of security regarding their own financial situation.

Ara Nranyan explained why the country continues to face economic and financial challenges: “Neo-liberal policies were realized in Armenia in the years immediately following the collapse of the Soviet Union. This meant that a country which had serious potential, in a period of two decades has been transformed into a state that has no industrial capacity but rather primarily exports its own labor force and some non-precious metals.” He went on to explain that the government’s proposed pension plan reforms will simply add one more commodity to Armenia’s exports – that is supplying funds to the international financial markets. “These factors will not contribute to strengthening the country’s financial markets, they will not create the structures necessary for social protection nor will they provide the necessary factors to create a prosperous existence similar to developed countries,” he stated. “We witnessed what happened as a result of unregulated neo-liberal economic policies – we all felt the effects of the international economic crisis. But here in Armenia, we have yet to learn this lesson.”

The parliamentarian continued by saying that Armenia implemented capitalism just as communism had been implemented during the Soviet regime – it was ideological and “real economic policy was sacrificed in the name of neo-liberal ideology and served the interest of a particular class in society,” he said. “We have forgotten what was in the interest of the nation.”

Regarding the potential for economic cooperation with neighbors, Mr. Nranyan said, “The other small republics in our region, Georgia and Azerbaijan, are not so different from Armenia with regard to their economic structures. All three republics dramatically modified their economic architecture and have very little diversification of the economy.” He went on to say that while the countries of the South Caucasus have made the same critical errors in economic policy, Turkey and Iran have implemented a policy of industrialization. “Therefore economic ties with these two large industrialized economies are difficult as long we have not adopted some protective measures in Armenia. As for economic cooperation with the other South Caucasus republics, there is an absence of mutual respect, trust and good will. In this kind of an atmosphere it is difficult to talk about economic cooperation.”