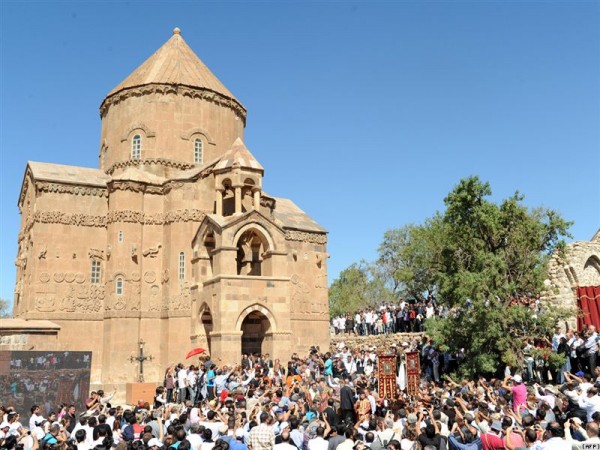 With no cross atop its dome, no belfry or tolling bells and a makeshift altar, the much-touted and controversial Mass took place Sunday, September 19, at Holy Cross Church on the island of Akhtamar in Van, officiated by the Istanbul Patriarchate’s Archbishop Aram Ateshyan.

Thousands of Armenians who had planned a pilgrimage stayed away from the scheduled Mass after Turkish officials refused to place a cross atop the dome and the general sentiment that the Mass was a propaganda ploy by the Turkish government.

The Great House of Cilicia and the Holy See of Etchmiadzin, as well as the Armenian Patriarchate of Jerusalem, boycotted the event. The Great House of Cilicia cited the blatant political charade by the Turkish government; the Holy See of Etchmiadzin cited the reversal of the Turkish government’s position to install the cross on the church’s dome as the reason fo the reversal of its earlier decision to send a delegation.

With bell chimes broadcast through a loud speaker, several hundred parishioners and Turkish government officials gathered at Holy Cross for what was originally seen as a historic Mass in a historic church. Most of the parishioners attending the Mass were Armenians from Istanbul, according to Turkish media reports.

No high-level Turkish government officials attended the ceremony and the church, which was deemed too small, was filled with local officials and guests, while most parishioners gathered outside the church to witness the Mass, which was the first held at that church in 95 years.
“Turkey failed to reach its objective because of its missteps in recent days,” said Giro Manoyan, the international secretariat director of the Armenian Revolutionary Federation-Dashnaktsutyun.

Manoyan pointed to recent Western media reports and cited CNN and BBC reports, which clearly stated that Turkey intentionally avoided opening Holy Cross as a church since in fears that Armenians would lay claims on lands and territory.

He urged the Armenian church leaders in Turkey to press for more religious ceremonies at Akhtamar, because, as Manoyan explained, by granting permission for Sunday’s Mass, the Turkish government claimed the Holy Cross church as a museum and as its property.

As Giro Manoyan noted, the Turkish authorities turned the Aghtamar’s Holy Cross Church issue into a “problem of installing and not installing the cross” in order to distract the international community’s attention from the main problem of the issue, which is Turkey’s international obligation to return all Armenian Churches in today’s Turkey to the Armenian community.

The ARF-D foreign policy spokesperson said that the Lausanne Treaty of in 1923 clearly states that “The Turkish Government undertakes to grant full protection to the churches, synagogues, cemeteries, and other religious establishments of the above-mentioned minorities. All facilities and authorisation will be granted to the pious foundations, and to the religious and charitable institutions of the said minorities at present existing in Turkey, and the Turkish Government will not refuse, for the formation of new religious and charitable institutions, any of the necessary facilities which are guaranteed to other private institutions of that nature.” This is an obligation that Turkey is dodging in the case of the Holy Cross church, stressed Manoyan.

Manoyan also called on Armenian authorities to clarify to the international community that the Turkish government’s “permission” for the Mass was done more as a gesture—appeasement—to its religious minorities than it was a concession to Armenia.

Manoyan was among hundreds who attended an alternative religious service held at the Armenian Genocide Memorial on a hill overlooking the capital, Yerevan. They denounced the service on Lake Van as a publicity stunt.