Download the PDF file (3.7 MB) Towards a Fair and Just Resolution: The Mountainous (Nagorno) Karabakh Conflict

The political conflict between Mountainous (Nagorno or Upper) Karabakh and Azerbaijan dates back to 1918, when for the first time in history a state named Azerbaijan was founded with the break-up of the Russian Empire. Never in its history has Azerbaijan had sovereignty over the Mountainous Karabakh region. The conflict resumed in 1988 and gradually escalated into an armed confrontation, when Azerbaijan responded violently to the peaceful popular quest of the Mountainous (Nagorno) Karabakh Autonomous Region to be reunited with Soviet Armenia. In 1991, the Mountainous Karabakh Republic was founded and it initiated the process of its independence in compliance with the domestic legislation of the USSR and in conformity with the principles and attributes required by international law for the creation of an independent state. 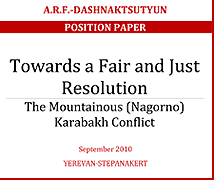 The ARF-Dashnaktsutyun issued this position paper in September 2010. It was also distributed in the Socialist International Committee on the CIS, the Caucasus and the Black Sea meeting in Baku, Azerbaijan, on October 11, 2010.