PARIS (ARF Press Office)—Representatives of Europe’s “Hai Tad” Committees came together at the Armenian Cultural House in Paris on November 13 for a pan-European Hai Dat Conference to address the EU’s approach to Armenia, Nagorno-Karabakh, the Caucasus, Genocide denial, and Turkey. 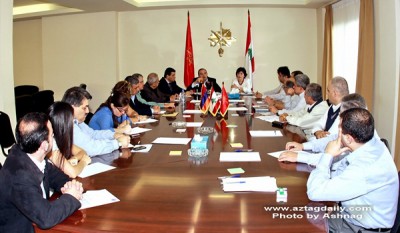 Attending the conference were delegates from the Armenian National Committee, the Defense Committee of the Armenian Cause, and the European Armenian Federation for Justice and Democracy in Europe and Armenian Revolutionary Federation bodies and Hai Tad committees from Great Britain, France, Belgium, the Netherlands, Germany, Bulgaria, Greece, and Cyprus.
Also in attendance were directors and representatives of the European Armenian Federation’s board of directors and staff from its Brussels office, the Director of the ARF Bureau’s Political and Hai Tad Office, ARF Supreme Council of Armenia Chairman Armen Rustamian and ARF Bureau members Hagop Der Khachaturian, Levon Mkrchyan and Mario Nalbandian.

Participants presented reports to the conference and discussed the challenges created by the latest developments in European politics. Extensive discussions were held on the political situation in the Council of Europe and other European structures, as well as the policies that have been adopted within those structures regarding the South Caucasus.

The conference also focused heavily on European-wide efforts to secure the recognition of the Nagorno-Karabakh Republic’s independence.

The participants also discussed ways to neutralize the damage done by the Armenia-Turkey protocols, as well as the need to influence the international community to increase pressure on Turkey and Azerbaijan to drop their illegal blockade of Armenia.

Dealing with the South Caucasus, the conference delegates discussed the current socio-political condition of Armenians living in Javakhk aand the general situation position of Georgia’s authorities to its large Armenian minority.

Particular focus was also given to developing strategies for expanding the reach and influence of Europe’s Hai Dat Committees and offices, as well as the possibility of establishing a presence in more EU countries. In this regard, the conference welcomed the official opening of the European Armenian Federation’s office in Tbilisi, the establishment in Paris of the French Office of the Armenian Cause and the formation of the Hai Tad Committees of Bulgaria and Spain.

At its close, the conference adopted corresponding decisions on the issues discussed on the agenda, including future policies and activities.

On October 30, a similar conference was held in Beirut, where representatives of Armenian National Committees of the Middle East discussed regional issues and the rise of Turkish influence in the area.

“At this juncture, taking into consideration the political developments in the region and given Turkey’s growing penetration in the region, we decided to organize this conference in order to consult one another and discuss this issue,” said Armenian National Committe-Middle East director Vera Yacoubian. Yacoubian explained that the conference’s goal was to develop a new strategy in light of Turkey’s increasing presence in the region and how that reality can impact ANC activities in the Middle East.

The ANC leader emphasized that even in Lebanon, where the Armenian community is an integral part of Lebanese society, Turkey’s recent overtures foreshadow growing challenges and obstacles for Armenian communities and ANC efforts, similar to other Middle Eastern countries.

The conference participants, which included representatives from Syria, Iran, Egypt, Kuwait and the Persian Gulf regions, discussed the pursuit of the Armenian Cause in the Arab World, where there are varying approaches and challenges. The imperative for the pursuit of Armenian issues was emphasized by all participants of the conference.

Armenian Revolutionary Federation-Dashnaktsutyun Bureau member Levon Mkrtchyan was on hand to address the importance of the conference given the increasing level of Turkey’s anti-Armenian posturing and its manifestations in Turkey’s dealings with its neighboring states.
Mkrtchyan pointed to the so-called Neo-Ottomanism, which has become a driving point for Turkey’s foreign policy and the importance of that approach within the Arab World. He emphasized that, more than ever, there is a need for concrete approaches when working in the countries that have played host to Genocide survivors. He said the Armenians of the Middle East must be able to defend its historic rights, but take into consideration the sensitivities and approaches within each country.

Turkey’s growing role, as well as its close relations with the Arab World, poses new challenges for the Armenian people. This, the conference concluded, requires a focused and committed approach to the pursuit of the Armenian Cause in this area of the world.