YEREVAN – The National Assembly adopted in the final reading on Wednesday a controversial government bill allowing the existence of a limited number of foreign-language schools in Armenia. 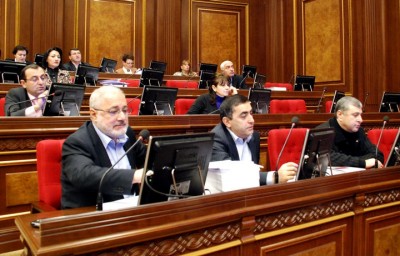 Members of the ARF-D faction

The two opposition parties represented in the 131-member legislature remained adamant in rejecting the bill. “With this package, we are clearing the way for the entry of [foreign] sects into our language sphere as well,” said Artsvik Minasyan of the Armenian Revolutionary Federation-Dashnaktsutyun. “And this is a matter of national security.”

All of the two dozen lawmakers affiliated with the Armenian Revolutionary Federation-Dashnaktsutyun and the Heritage parties boycotted Wednesday’s parliament vote on the bill. But it was backed by 69 other deputies representing the parliament’s pro-government majority.

The bill involving amendments to two Armenian laws met with fierce resistance from opposition and civic groups as well as prominent public figures after being unveiled by the government in May. Critics believe that it would jeopardize Armenian’s constitutionally guaranteed status as the country’s sole official language.

The outcry led the government to water down the proposed amendments before pushing them through parliament in the first reading in June. In particular, the government agreed to restrict to two the number of foreign-language private schools that would be allowed to operate in the country.

The altered bill also stipulates that up to nine foreign-language high schools can be opened elsewhere in Armenia in accordance with inter-governmental agreements signed on a case-by-case basis.

The changes failed to satisfy the critics, who have staged street protests outside the parliament and government buildings in Yerevan. They have vowed more protests and legal action against the bill.