Interview with Armen Rustamyan, a member of the Armenian Delegation to PACE, Head of the Armenian Parliament Foreign Relations Commission, parliamentarian from ARF-Dashnaktsutyun 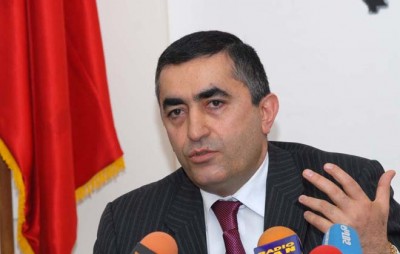 The Parliamentary Assembly of the Council of Europe (PACE) has voted to grant “Partner for democracy” status to the Palestinian National Council (PNC). The Armenian Delegation takes a positive view of the Assembly’s decision. Can it be used in future regarding Mountainous (Nagorno) Karabakh’s status at the CoE?

It is almost an unprecedented case when a country that has not been recognized in the world, a country that has neither the CoE nor UN membership, becomes a CoE partner. This step is very important and, I am sure, it will positively affect the resolution of the Palestinian-Israeli conflict. Thanks to the Azerbaijani delegation, PACE has taken a course saying the conflicts create obstacles to democracy, whereas, in sober fact, democracy helps resolving conflicts. In this light, this step is very interesting: Palestine is recognized as a partner for democracy. If both the parties take the path of democratic development, it will help resolving the conflict. After all, it is impossible to imagine the positive role of the CoE in resolution of conflicts if it does not adhere to the necessity of involving all the conflicting parties into the settlement process.

Earlier, they at PACE declared that the Kosovans, representatives of the Northern Cyprus and now also Palestinians should be present at the Council of Europe discussions on the conflicts in their regions. A question arises: isn’t it possible to put the issue of the presence of the Mountainous Karabakh representatives on agenda?

In my speech during the debates on the report on Palestine on Tuesday I said that the CoE can make the right thing refusing the debates unless all the parties involved are present. Therefore, instead of reanimating the Special Committee on Karabakh, which has proved ineffective, the CoE should think of a status allowing the legitimately elected representatives of Karabakh to be present at forums on the issue directly related to them.

Is the CoE competent to put such issue on agenda, as it is obvious that in the issues related to territories the CoE follows the similar decisions of the United Nations?

It is the very case when the UN adopted no decision. It was PACE that put the issue on agenda, as it thought that the UN would settle that issue and adopt a decision on its new member. But, it did not. However, PACE could not refuse its intention and it is good. The resolution says that irrespective of whether Palestine is recognized or not, these two aspects must not be linked. In that case, why the CoE cannot act in the same way with regards to Mountainous Karabakh?

Are you going to address your question that was voiced at the session also to the executive bodies of the Concil of Europe?

Today’s decision of PACE gives an opportunity to say how unpromising is to lay emphasis on the Special Committee on Karabakh. We have repeatedly declared that we will not participate in the work of the Special Committee and this issue has now been returned to the Bureau. We have to wait a couple of months until Turkey’s presidency ends. I think the new presidency must put this issue on agenda and find a solution to it. If they want the Council of Europe to have its contribution to the conflict’s resolution – and we are not against it – it is necessary to take the path that has already proved efficient. The cases I have mentioned are quite efficient ways to settle the issue. Why should we display a different approach to the Karabakh conflict? In such case, let the OSCE Minsk Group to resolve the conflict. If you tackle the problem, ensure the presence of the Karabakh representatives at the process.

Should it be the CoE’s initiative or the Karabakh party is to apply for that?

It is a special procedure, of course. In the case of Palestine, the Regulations say that partnership is granted to the countries outside the CoE space. But it is the formal side of the issue. In point of fact, it is necessary to find a way to ensure NKR’s presence, otherwise no discussions on the conflict can be considered robust. In fact, the decisions cannot be adequate and legitimate. Therefore, the PACE Resolution 1416 does not work (the resolution made it possible to set up the special committee on Karabakh at PACE Bureau- ed.). They do not want to speak of this. But the question must be posed radically to change the situation drastically.

It is impossible to annul it, indeed, but it is possible to adopt another resolution. First of all, it is necessary to change the atmosphere here and to understand why the resolutions are not fulfilled. Why they adopt resolutions, if they will not be fulfilled. No one wants to pose such question. We say it is necessary to adopt resolutions adequate to the situation, resolutions that can be fulfilled; otherwise, they damage the authority of the organization. Azerbaijanis take advantage of that and want to show the inefficiency of the organization. But, what has led to such situation? The organization did Azerbaijan’s bidding… But, the resolution was efficient for a while under Lord Russell-Johnston… Russell-Johnston had repeatedly cast doubts on the efficiency of the format.

Did he arrive at such a conclusion after meetings with the Armenian and Azerbaijani delegations?

Yes. There were several efforts to achieve some results through that structure, but they failed as we have some incompatible positions and there are issues that are discussed exclusively inside the Minsk Group, while that structure has no such mandate at PACE. It is necessary to tackle the problem seriously or not to take the matter up at all. One should observe the principle “First, do not harm” here.

Can you explain Azerbaijan’s aspirations for communication with the Armenian delegation within the special committee?

They want to create a parallel format at PACE, but the issue cannot be discussed here in essence and completely, as the parliamentary organizations have a shortcoming i.e. not all the parliamentarians are informed of the essence of the issue and Azerbaijanis can easily lobby among those who are not aware of the issue. So, they have been using that opportunity so far and want to keep working the same way. No one will verify any facts. Resolutions will be adopted and Azerbaijanis will use them in the negotiation processes, in the Minsk Group process, for instance.

Head of the Armenian Delegation to PACE has suggested a moratorium for mutual accusations within PACE session. Will it be implemented?

That suggestion of our delegation is a specific step: if we want to do something useful, we must start with ourselves. Raising a serious issue – resolution of the conflict, restoration of confidence between the peoples – is good, but it requires certain steps. One of such step is civilized debates and refusal of mutual accusations.

Do you believe in that idea?

We do our best. We urge them to follow our example. But, they insist on the work at the subcommittee on Karabakh. What will that change? Nothing, the same quarrels, accusations, lie etc. That is why the subcommittee did not work. Every time we met, we insisted on our positions and left it at that. Let’s display a political will, start a civilized communication and serve as an example for our peoples.

In addition, we say that we can contribute to resolution of humanitarian issues, for instance, the issue of the missing people. There are also other moments, for instance, environmental issues, which we can settle together without damaging the political process. We suggested that package, but it is not favorable to them, since their position has not changed. They lie when they offer a combined work. Their official stance is clear: “No cooperation is possible unless the political problem is resolved.” Actually, this position puts an end to everything. It is a deadlock position and makes further contacts useless.