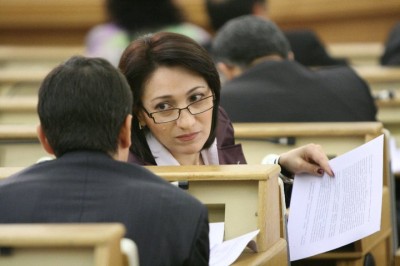 On November 23, during a press conference at the National Press Club, ARF-D Member of Parliament Lilit Galstyan said that state policy on public service personnel has become a vote-attracting mechanism for the political parties. Many are joining the political parties without any knowledge of the principles those parties preach thus adopting the mentality of someone who bends his head, only to secure a job or a pension or to having their son skipped from his military service, breaking simultaneously the state’s backbone, in other words the civil society which must be built upon people whose values are healthy. Galstyan added that changes of public service personnel take place prior to the elections rather than after. Under these circumstances it will be very difficult to achieve a free and fair elections procedure as opposed to the government’s statements. The ARF-D MP is convinced that this is yet another cause of immigration since partisans or voters are better likely to get a job. “You will join this or that political party so you can have a place under the sun” said Galstyan.

Commenting on French Foreign Minister Alain Juppé’s recent statement concerning France’s readiness to host the discussions about the Genocide period the ARF-D MP said that it’s equivalent to negating that such a crime ever happened especially when French President Nicolas Sarkozy was just talking about the need of an anti-negationist Genocide law and was urging Turkey to reconcile with its past and recognize the Genocide. Galstyan pointed out that the recognition of 1.500.000 Armenians’ Genocide is becoming an object for political and moreover electoral games and called the Armenian community of France to exercise its voting right properly.