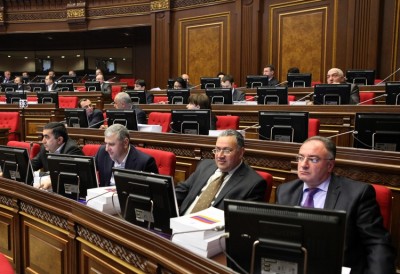 ARF-D Parliamentary Faction’s motion of no confidence against the government was put to a vote today. The Parliament by 13 votes for, 48 against and 4 abstentions declined ARF-D’s motion. ARF-D’s motion was backed up by the Heritage (Zharangutyun) Party.
The 2012 budget draft law was also scheduled to be put to a vote today. Www.emedia.am reports that from the 77 MP’s enlisted as present in the session the budget draft law was approved by 66 votes for and 2 against. ARF-D refused to take part in the vote in an effort to boycott it. 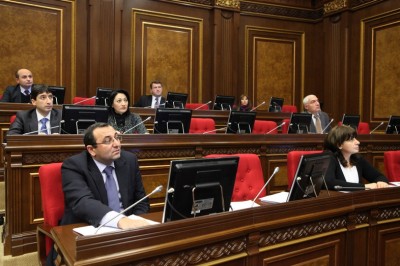 The December 7 parliamentary session commenced with a moment of silence in memory of the victims of the 1988 earthquake. Right after, the lawmakers tried to put in vote three draft laws but they didn’t succeed in securing a quorum. The schedule of the voting was overthrown after ARF-D Parliamentary Faction refused to take part. Since at the same time, many Members of the Parliament were visiting the earthquake disaster zone, the voting was postponed for the next day including the one about the 2012 budget draft law.