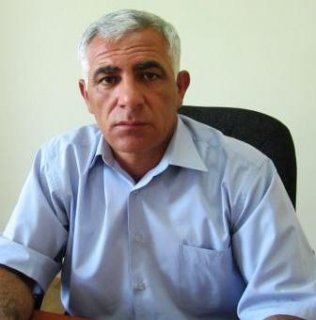 On April 2, Hrach Muradyan, mayor of the village of Proshyan, was found dead, killed by a shot to the head. Muradyan was a member of the Armenian Revolutionary Federation (ARF-D), a freedom fighter of the Artsakh movement, and was serving his third term as mayor of Proshyan, a village in the Kotayk province. Muradyan was 50 years old, and had been mayor since 2005. The police has launched an investigation.

The ARF-D Supreme Council of Armenia issued the following statement in regard to the assassination of Muradyan.

“Today, on the morning of April 2, the mayor of Proshyan village, Hrach Muradyan became the victim of a terrorist act, right across his office premises. A premeditated and planned assassination took place. It is obvious that regardless of the perpetrators, the crime is a side-effect of the atmosphere of impunity and intolerance.
Hrach Muradyan was a loyal member of ARF-D; from the very beginning of the Artsakh liberation struggle till its ending, he paved a glorious fighting path. He was awarded with the Battle Cross Order of the 2nd degree of Artsakh as well as with numerous medals for having served the country. Since 2005 he was elected mayor in three consecutive times; he was acknowledged as an exemplary leader, he had implemented various projects and had assisted to the solution of Proshyan people’s problems.
Being a fighter by nature, an independent personality, an individual guided by the people’s benefit Hrach Muradyan indulged the love and respect of his fellow villagers. This caused discontent to some. During his years in office, there were always efforts by others to create tension. Eventually, the threatening and terror that targeted him led to his death.
It is with deep sorrow that we note that in our country the citizen’s safety is not guaranteed, the criminal behavior has become an inseparable part of our life. The conspirator bullet that took Hrach Muradyan’s life was aimed not only against a noble Armenian and a compassionate leader but against the statehood and the prestige of the Armenians. The ARF-D condemns the assassination and demands that the crime be solved promptly and in full and that the executors and organizers are punished in the strictest way.