YEREVAN—Member of the Armenian Revolutionary Federation’s (ARF-D) Supreme Council of Armenia and Member of Parliament Aghvan Vardanyan met on Thursday with representatives of the UK’s Labour Party in Yerevan. The Labour Party Members, Stephen Pound and Mike Gapes, were on visit to Armenia with a delegation of other British members of parliament led by John Whittingdale, head of the British Group Inter-Parliamentary Union.

In their meeting, the parties discussed issues concerning Armenia’s foreign policies, the resolution of the Arstakh conflict, Armenian-Turkish relations, and the approaching centennial of the Armenian Genocide, among other issues.

Aghvan Vardanyan thanked the British members of parliament for their hard work toward developing and expanding relations with the republics of Armenia and Artsakh. 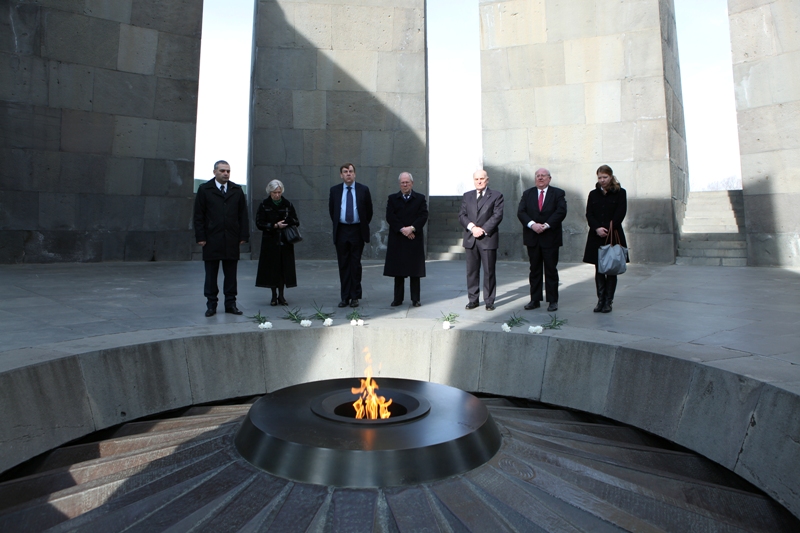 The British parliamentary delegation at the Tsiternakaberd Genocide Memorial

Stephen Pound first visited Armenia and Artsakh in 2007 at the initiative of the Armenian National Committee of the United Kingdom (ANC UK). In Artsakh, Stephen Pound met with the Speaker of the Artsakh National Assembly, the Minister of Foreign Affairs, and other government officials. He has since visited Armenia and Artsakh on numerous occasions. On Feb. 11 of this year, Stephen Pound called the attention of the UK Parliament to the issue of Artsakh’s independence and Azeri aggression against Armenians in Artsakh.

Prior to that, Pound has on several occasions urged Parliament to consider formal recognition of the Armenian Genocide.

Stephen Pounds colleague Mike Gapes was in Armenia for the first time. Also present at the meeting was the ARF-D Political Affairs Director Giro Manoyan.

The British parliamentary delegation have also visited government officials including the President Serzh Sarkisyan, Foreign Minister Edward Nalbandyan, and others. The central focus of the inter-parliamentary group’s discussions with Armenian officials has been the development and strengthening of Anglo-Armenian relations, the coordination of both states’ foreign policies, and cooperation in international trade and development.

“We are all united in supporting Armenia, and we consider ourselves Armenia’s friends who will continue their mission,” the parliamentary delegates expressed in their meeting with President Sarkisyan.