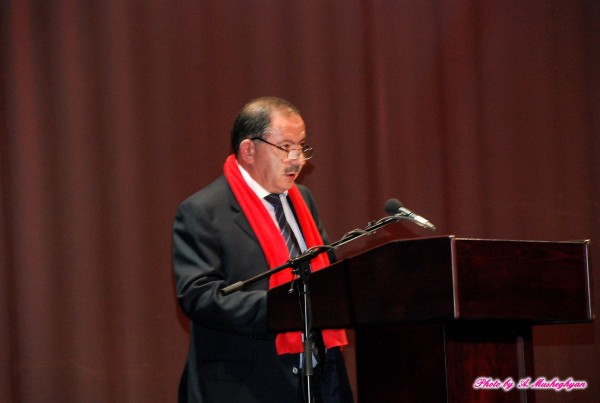 There is one explanation for the epic existence of the ARF-D that has spanned three centuries: It is the genuine reflection of our identity, our people, and our Armenianness, both as an ideology and as an organization. There is no other secret.

The ARF-D will cease to exist when both this identity—a result of our culture, our spiritual life, and the decency of our fighters and our villagers—and our Armenianness are abandoned. Our Armenianness is our Bible in this earthly life.

Sadly, the ARF-D is often viewed through a narrow lens. It is seen through its strength, with its battle-readiness overshadowing its spiritual and cultural depth. Aram Manougian, Drasdamad Ganayan, and Soghomon Tehlirian have played as much of a role in the ARF-D, in shaping its essence, and our appreciation of it, as have Daniel Varoujan, Siamanto, and Hovannes Toumanian. The song “Ambi Dagits Chour E Kalis”* reflects the ARF-D as much as “Menk Angeghdz Zinvor Enk”**.

And it is precisely for being this genuine reflection of our people and their Armenianness that the ARF has always been targeted both by foreign powers that have tried to prevent Armenians from organizing and becoming a force within themselves, and by domestic opportunists.

Criticism does not kill; it strengthens—if you are sure of your path and are loyal to your essence and principles.

That is what they did because they believed and worked towards it. They believed in Armenia. They worked dutifully.

The laurels of the ARF-D do not belong to our generation. And we will be the last of the unworthy ones if we squander their legacy; if we are unable to carry our share of the burden with dignity; if we cannot walk in unison; if we cannot modernize while maintaining the essence and depth of the ARF-D; if we cannot pass on the commitment to the vision of a free, strong, and prosperous Armenia to the next generation.

It has been 25 years since the ARF-D has become a fully active political party in its own homeland, in its own independent state.

Yes, we have been consistent; we have not engaged in demagoguery; we have not changed positions between one day and the next. We have continued to stay loyal to our national and universal values. In our efforts to build a free, democratic, and just state, we have been determined.

Yes, in the political sphere—it seems—we have not made major mistakes. Whether as part of the ruling coalition or the opposition, we have not compromised the independence and autonomy of our party.

But how little we have accomplished.

Within this independent state, we have been unable to organize the people into an informed citizenry that defends its rights, to create a harmonious public, and to shape an environment of trust.

We have been unable to reduce the enmity, hate, and wickedness that consume us internally.

We have been unable to create a system that is somewhat just; to eliminate the rift between our own government and our own people; and to foster a more or less healthy, and spiritually, morally, and culturally rich environment.

We have been unable to create a political, economic, military, spiritual, and cultural elite that is driven by the same national values.

We have been unable to transform the diaspora into a unified force that supports not only itself but also Armenia, Artsakh, and our army.

Within the ARF-D, we have been unable to shape a culture of free thought, debate, and self-criticism that leads to renewal.

And finally, we have been unable to present the essence of the ARF-D—its democratic nature, goals, operational style—in a simple and accessible way to a large segment of our people, including the independence generation, and to draw strength from them as an organization.

That is how much we have not accomplished.

That is the colossal work we have yet to do.

On this day of celebration, I could not have structured my message differently. Our realization of what remains unaccomplished, and the honor of an ARF-er compel us to look ahead, and persevere.

The ARF-D stands resolutely for dignified life. We have a lot to do. And we will do it together.

We will do it, believing in Armenia, and working dutifully. We will do it for the sake of our highest principles…

For the sake of the Armenian people and the citizens of the Republic of Armenia,

For the sake of Armenia’s independent statehood,

For the sake of Artsakh,

For the sake of Armenianness.

* A popular Armenian song in Anoush Opera, the lyrics of which were written by Hovannes Toumanian