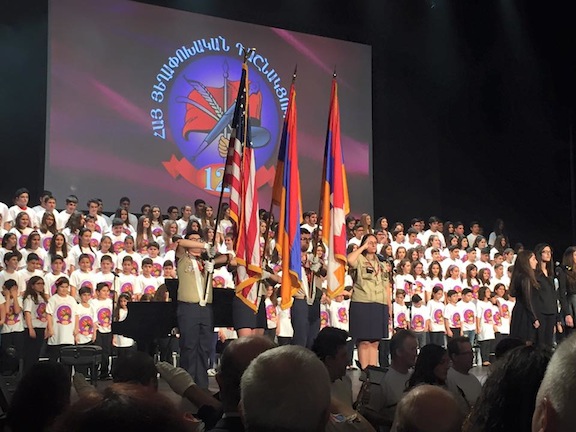 (asbarez.com) PASADENA – The Pasadena Civic Auditorium was overflowing with a capacity crowd of more than 3,000 who came together Sunday to celebrate the 125th anniversary of the Armenian Revolutionary Federation-Dashnaktsutyun at an event organized by the ARF-D Western US Central Committee. The organizing committee was forced to turn away hundreds of people as the hall had reached capacity.

The message of the evening was a resounding call to action to more aggressively push for the demands and just aspirations of the Armenian people, and for the ARF-D to continue its mission of bringing together Armenians of all walks of life to collectively advance the Armenian Cause.

The evening’s keynote speaker, ARF-D Bureau member Armen Rusdamyan, who is also the party’s parliamentary bloc president in Armenia, spoke of the need to assess the lessons the ARF-D has learned during the past 25 years of an independent Armenia and to focus the organization’s efforts in advancing the building blocks for creating an Armenia that can become socio-economically more just and politically more independent. He also said that not one inch of territory can be comprised and conceded, in discussing the Nagorno-Karabakh conflict.

Delivering the remarks on behalf of the ARF-D Western US Central Committee, its chairman, Dr. Viken Hovsepian outlined that in the 125 years, the ARF-D’s mission and priorities continue to be service to the people on the road to advancing justice and our National priorities. He said that the ARF-D will continue to demand that the Turkish government, not only recognize but make reparations for the crime of Genocide, and demand that the Azerbaijani government to end it military policy of destabilizing the south Caucasus because Artsakh is an indivisible and indigenous Armenian territory, whose future cannot be compromised. He also looked inward at the Armenian community and said that the ARF-D will demand that the Armenian Church elevate its outreach to the community by educating the young generation about the tenets of the Armenian Church. He also called on Armenian schools to step up their efforts and ensure that students speak the Armenian language. He also said that the ARF-D must look at itself and learn from past lessons to be able to persevere to greater successes.

Gev Iskajian, the chairman of the Armenian Youth Federation Central Executive, outlined the activities of the organization in service to the Armenian people from its inception in 1933 by Karekin Njdeh to its current activism, which spans college campuses and impacts the youth today in pursuing the Armenian Cause.

The evening’s program began with an impressive flag ceremony by the Homenetmen Western Region Scouts who entered from the back of the auditorium, carrying flags and being led by the Homentemen Marching Band. After the performance of the US and Armenian national anthems by students of the Lark Musical Society, Mistress of Ceremonies, Miganoush Adjemian began her opening remarks by welcoming those in attendance, and throughout the evening adeptly guided the program to its fruition, intermittently interjecting explanations about the ARF-D, its emblem, anthem and its affiliate organizations.

Asbarez will feature expanded coverage of the event in future editions.