(armenianweekly.com) YEREVAN—Delegates representing the ARF-D’s student and youth organizations from around the world met for a three-day (Jan.21-23) conference in Yerevan at the ARF-D “Aram Manougian” Center. 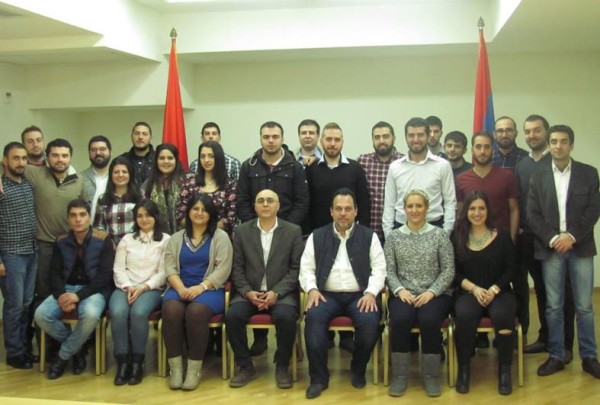 Delegates representing the ARF-D’s student and youth organizations from around the world met for a three-day conference in Yerevan at the ARF-D “Aram Manougian” Center.

Thirty representatives from around 20 regions throughout the world (including Armenia, Nagorno-Karabagh, Canada, the United States, South America, Europe, Iran, and Lebanon) participated in the conference organized by the ARF-D Bureau Youth Office, during which they evaluated their respective activities and held engaging discussions about several issues ARF-D youth face around the world.

The conference began with reports delivered by the delegates, who outlined the key activities in their regions and noted both shortcomings and achievements. The overall challenges facing the Armenian youth in Armenia and the diaspora were also discussed. The representatives were then briefed about the activities of the ARF-D Bureau Youth Office.

Despite differences in communities and host countries, the many similarities that bind Armenian youth throughout the world were identified and made the focus of discussion and debate. Special emphasis was also placed on the importance of ARF-D youth summer camps that are held in different regions of Armenia and Karabagh.

The representatives also noted the importance of using new educational materials that will better prepare the ARF-D youth and student organization members, as well as the importance of a more structured public relations strategy.

High on the list of priorities for the conference was the need for youth to be more vigilant in addressing the current socio-economic challenges affecting the Armenian nation, with many of the delegates calling for developing more momentum in the fight to establish social justice within Armenia. Along these lines, emphasis was placed on participating in social movements that pertain to student and youth issues.

The attendees concluded that through the conference’s pan-Armenian structure, the ARF-D youth and student organizations will continue to engage the youth of Armenia and the diaspora around issues of national, political, and ideological significance. It was also decided that they will continue the struggle against Turkey and Azerbaijan’s anti-Armenian lobby of falsifications and defamation.

At the conclusion of the meeting, the representatives from the ARF-D youth and student organizations reiterated their commitment to wholeheartedly serve the Armenian nation, the homeland, and the Armenian Cause.