Special for the Armenian Weekly

Of the plethora of contexts from which the history of the Armenian Revolutionary Federation (ARF) is inextricable, that of the late 19th-/early 20th -century Ottoman Empire is among the most important. As a prominent political party, the ARF came to the forefront of Ottoman politics particularly after the July 1908 Constitutional—or Young Turk—Revolution, in which it played an important role. While it had had underground cells, secret meeting places, and an organizational network in Istanbul (Constantinople) since its founding in 1890, it was the political liberty brought about by this revolution that allowed the ARF to operate openly in the imperial capital.(1)

The following article recreates the attempt of two graduate students to locate the ARF’s first public headquarters in Istanbul, which was likely opened in July or August 1908. It shows how we connected information in historical and contemporary sources with the empirical reality of the streets, and it finishes with some leads for others to follow.

Our story begins with one of us having come across an address—“Sakiz Agac, 51, à Péra” (51 Sakiz Agac in Pera)—for these headquarters in Raymond Kévorkian’s magnum opus, Le génocide des Arméniens.(2) (Kévorkian, in turn, had come across the reference in Vahan Papazian’s [nom de guerre Goms] 1950’s memoir.(3)) With the other’s arrival in Istanbul, we decided to launch an investigation aimed at finding out whether the building still existed. 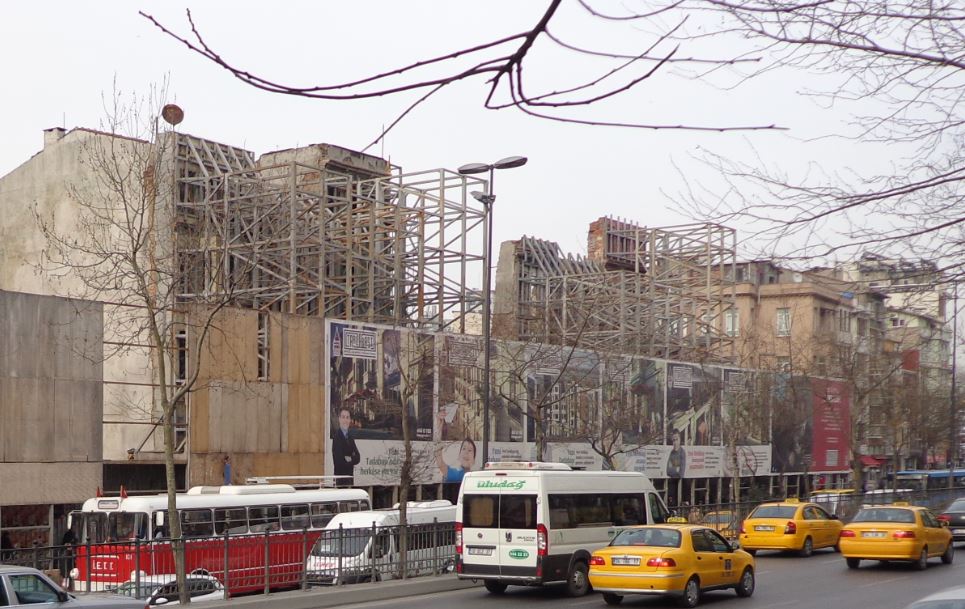 Sakız Ağacı today is sealed off for redevelopment. On the other side of the fence stand what used to be the Anarad Hughoutioun School for Girls, the Sourp Anna Catholic Orphanage, and the Mukhitarian Catholic School for Boys.(4) (Photo: Varak Ketsemanian)

We already knew that what used to be the district of Pera overlapped more or less with the touristic parts of today’s municipality of Beyoğlu. Running a search through Google Maps, we discovered that Sakız Ağacı Street lay just north of İstiklal Street, the city’s main promenade. “An easy find!,” we thought—but the reality on the ground proved to be quite different. It turned out that Sakız Ağacı today is not what it had been in 1908; also, it was completely closed off for construction. We therefore turned to a different kind of map: that great tool of urban archaeology, Jacques Pervititch’s cadastral drawings of 1922-45 Istanbul.(5)

Pervititch’s maps showed us that Sakız Ağacı is now a truncation of what it once was. In 1945—and this was later confirmed by earlier (1905 and 1913/1914) maps—it had extended all the way to İstiklal and had included today’s Atıf Yılmaz Street.(6)

Once on Atıf Yılmaz, however, we came face-to-face with a new problem: the absence of a unit 51. The street was cut off by Tarlabaşı Boulevard after number 33. We turned again to our historical map, and after struggling to overlay what we had on paper with what we had under our feet—street names had changed and so little seemed to match up!—we came to the realization that our building must no longer exist.

Our presumption that a series of buildings along Tarlabaşı had been torn down to widen the boulevard was later confirmed: During the late 1980’s, the area’s topography had undergone drastic changes in order to attract foreign capital to the city.(8)

Having completed our on-the-ground research, we found that there was still much we did not know. How certain could we be that this street had not changed between 1908 and 1945 (when Pervititch had drawn his map)? What was an ARF headquarters really used for? Was it just one office or an entire building? Did the party have other offices in the city? And was it the same as the “Azadamard building” we had heard mentioned?

In order to answer the first question, we turned to older and less thorough cadastral maps created in 1905 and 1913-14.(9) Thankfully, these were just detailed enough to confirm that the unit numbers in this area had remained the same over the first half of the 20th century. We were now certain that we had traced the building correctly.

For the second question, we referred to Papazian’s memoir. There, we found the site labeled “our home” and described as an exciting place reflecting the celebratory atmosphere so widespread following the proclamation of the constitution:

“That ‘home’ was our center. Old and new comrades gathered there all throughout the day. It was a political-organizational hotbed [hunots], and it was there that our leadership was centered; it was from there that orders would go out and from whence the outcomes of our comrades’ efforts would be coordinated. … Old and new comrades [including former exiles] would come there from the provinces, Europe, and the Caucasus in troves, looking to be put to work in the constitutionally free Turkey and to breathe the ‘free air,’ as some were calling it. … Among the comrades already in Istanbul I remember H. Shahrigian, Hrachia Tiriakian, H. Kalfayan, the poets Siamanto, Varoujan, R. Zartarian, Dr. G. Pashayan … [and] junior comrades and writers such as Sh. Misakian, Kegham Parseghian, Cheogourian, Sevag, Sirouni, H. Hampartsoumian, and many others.”(10)

While we were not able to determine whether the entire building was used by the ARF or if the party was just a tenant, we did find out that these headquarters were different from the “Azadamard building.” Azadamard was the name most commonly used for the Western Bureau’s organ. It operated from 32 Yeniçarşı Road from its July 23, 1909 advent until June 29, 1910; from 76 then 74 Hamalbaşı Road from June 20, 1910 to Oct. 23, 1914; and from 37 Kabristan Street—all in Pera—from Nov. 21, 1918 to Aug. 21, 1919.(11) Around November 1922, the party was operating out of the district of Hasköy.(12) It is these bits of information that tell us that these headquarters were not in the “Azadamard building”; that epithet belonged to one or more other places. It is certainly not surprising that the ARF in Istanbul operated out of multiple places given that, at a certain point, the city was the seat of the Western Bureau, the region’s Central Committee, and an ARF student union.(13)

The story of the ARF headquarters we have just described is one of the many episodes of the vibrant Armenian life in late-Ottoman era Istanbul. Although this article was only a modest attempt at locating one out of the hundreds of buildings relevant, in one way or another, to the Armenian communities of pre-genocide Istanbul, our hope is that it will encourage others to undertake similar endeavors. Knowing that our work remains inconclusive—and far from believing that we have discovered some forgotten truth—we believe to have made a humble contribution to what many others have done before us: exploring and documenting the Armenian landmarks of a city that has been a focal point of so much history. We look to others to help us fill in the gaps.

Varak Ketsemanian received his B.A. in philosophy (with a minor in history) from the American University of Beirut. He is currently pursuing his M.A. at the Center for Middle Eastern Studies at the University of Chicago. His articles have appeared in the Lebanese Armenian Aztag Daily, AUB’s Outlook, and the Armenian Weekly.

Daniel Ohanian is originally from Toronto. He received his B.A. and M.A. in history from York University, Canada, and is now a research assistant and M.A. candidate in history at Istanbul Bilgi University, in Turkey.

For a first-person, interactive view of the area, click here.

8 Çağlar Keyder, “A Brief History of Modern Istanbul,” in The Cambridge History of Turkey, vol. 4, Turkey in the Modern World, ed. Reşat Kasaba (Cambridge: Cambridge University Press, 2008), 504–23, 515–6. As we had seen with the closing off of the “new” Sakız Ağacı, the Tarlabaşı area continues to undergo change today. Nil Uzun, “Urban Space and Gentrification in Istanbul in the Twentieth Century,” in The Economies of Urban Diversity: Ruhr Area and Istanbul, ed. Darja Reuschke, Monika Salzbrunn, and Korinna Schönhärl (New York: Palgrave Macmillan, 2013), 236–54, 249–51.

There are still some blanks in our list, for although the organ began publication on July 23, 1909, it was not suspended until after April 24, 1915. Also, we are not certain when exactly it started up again in 1918 or when it finally shut down or converted to a politically unaffiliated newspaper. Hovsepyan, “ՀՅԴ Կ. Պոլսի պարբերական մամուլը, 1909–1920 թթ,” 177, 179.

12 Elizabeth Dodge Huntington, “Community Organization,” in Constantinople To-day; or, The Pathfinder Survey of Constantinople: A Study in Oriental Social Life, ed. Clarence Richard Johnson (New York: Macmillan, 1922), 121–164, 134. Recall here that World War I ran from July 1914 until November 1918. The post-war Allied occupation of Istanbul allowed many Armenian organizations to reopen their doors. This lasted until the Turkish National Movement’s entry into and the Allies’ exit from the city during September/October 1923.