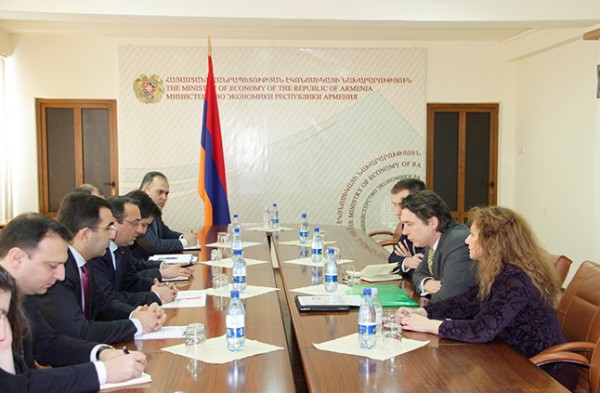 Greeting the guest, the Minister expressed gratitude for the activity of EBRD implemented in the development process of Armenia. The Minister spoke about issues of mutual interest, including the cooperation between EBRD and the Ministry of Economy of the Republic of Armenia, capital markets development and promotion of local currency financing.

“One of the most important issues of the Ministry of Economy is to change underdevelopment of the capital market. Our Ministry plans to carry out activities in order to develop new law of commodity and derivatives markets,” mentioned Artsvik Minasyan.

Sharing concerns on the raised issues, Mark Davis expressed the willingness of EBRD to develop the cooperation. Representing the activity of EBRD, the Head of European Bank for Reconstruction and Development Yerevan Resident Office highlighted the cooperation with the private sector mentioning that the priorities of the Government will serve as a guideline.

At the end of the meeting the sides expressed willingness to develop the cooperation between the European Bank for Reconstruction and Development (EBRD) and the Ministry of Economy of the Republic of Armenia.