The 25th Congress of the Socialist International was convened on March 2-4, 2017, in Cartagena, Colombia. The Congress which gathered more than 350 guests and delegates representing 86 political parties and organizations was hosted by the Liberal Party of Colombia (PLC), a member of the coalition government of the country. 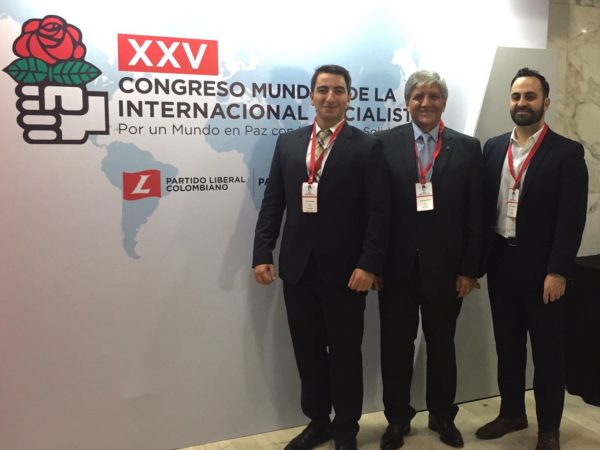 ARF-D was represented by a delegation headed by Mario Nalpantian, and also comprised of Vache Thomassian (Western Region, USA) and Hagop Agopian (Vancouver, Canada).
At the opening, welcoming speeches were delivered by the President of Colombia, Juan Manuel Santos, SI President George Papandreou (Greece), SI Secretary General Luis Ayala (Chile) and leader of the host political party, Horacio Serpa.
Under the main heading “For a world in peace, with equality and solidarity” the Congress discussed its leading item on the agenda, titled “Building a more peaceful world: resolving conflicts and preventing new ones”. Taking the floor ARF-D representative Mario Nalpantian elaborated on the Artsakh conflict stressing the need for putting an end to Azerbaijan’s ceasefire violations and its frantic armament. Nalpantian also referred to the situation in Turkey and to the persecution that has been unleashed by the ruling power of that state against HDP party.
Due mainly to Nalpantian’s intervention as well as taking into account a previously presented resolution by the ARF-D the Congress decided to include the following three paragraphs into the main and general resolution titled “For a world of peace, equality, Solidarity”:
1. We stand in solidarity with the Armenian people seeking dialogue with Turkey and we will continue to help, as agreed, a roundtable “How Turkish recognition of the Armenian genocide can contribute to a genuine reconciliation between Turkey and Armenia?”

2. The Socialist International calls for increased dialogue to end hostilities reduce tensions and armaments and build trust between Armenia and Azerbaijan. We call on the international community to support the ongoing efforts of the OSCE Minsk Group to work towards lasting peace in the region.

3. The Socialist International expresses our concern about the violation of human rights and deterioration of democracy in Turkey. We are particularly concerned about the arrest of thousands of activists, the detention of hundreds of elected municipal leaders and the detention of [HDP co-chairs] Selahattin Demirtas and Figen Yuksekdag. We call for their release and for new peace dialogues to address the democratic and human rights development of Turkey.

The 2014 December SI Council Meeting in Geneva, recognizing the continued worldwide progress on this human rights and Genocide prevention issue, appropriately placed the Armenian Genocide on the agenda of its first Council in 2015, held one hundred years after the start of this atrocity.

The July 2015 Council Meeting in New York endorsed an agreement reached earlier by the SI Vice-Presidents from Armenia and Turkey, for the Socialist International to organize a special hearing or round-table discussion around the theme: “Would Turkish recognition of the Armenian Genocide allow for a genuine reconciliation between Turkey and Armenia?” This Meeting was to have included the participation of representatives of SI member parties in both Armenia and Turkey, as well as other interested member parties, specially invited experts, NGOs, and others.

Consistent with both past decisions on this matter and the SI’s longstanding support for a just resolution on the issue of the Armenian Genocide, the SI XXV Congress reaffirms its readiness to work with our Armenian and Turkish member parties to facilitate a hearing or round-table discussion regarding the benefit of Turkey’s recognition of the Armenian Genocide for reconciliation between Armenians and Turks.”

During the discussion on organizational matters Nalpantian objected to upgrading the status of the Social Democratic Party of Azerbaijan (SDPA) to full membership arguing that the ARF-D had in the past protested against the upgrade of that party considering the conduct of its representative at the SI Geneva meeting where Azerbaijan’s representative had accused the Armenians of perpetrating genocide. Following an exchange of opinions the representatives of the Azerbaijani party were compelled to publicly apologize to Mario Nalpantian and only after that, was the status of their party upgraded to full membership.

Prior to the 25th Congress the SI Presidium held its meeting where Mario Nalpantian took part in his capacity as Vice President of the organization. Nalpantian had also participated in the session of the Socialist International’s Finance and Administration Committee (SIFAC) as ARF-D is one of its members.

On March 1st the session of the SI Council was held in order to discuss the matters that were to be presented at the Congress. The ARF-D delegation took part in this session as well.

The ARF-D delegation held numerous meetings with delegates from various organizations including Syria’s Kurdish Democratic Union Party (PYD) and Iraq’s Patriotic Union of Kurdistan party (PUK). HDP was unable to attend due to the persecution that the Turkish authorities have unleashed against it.