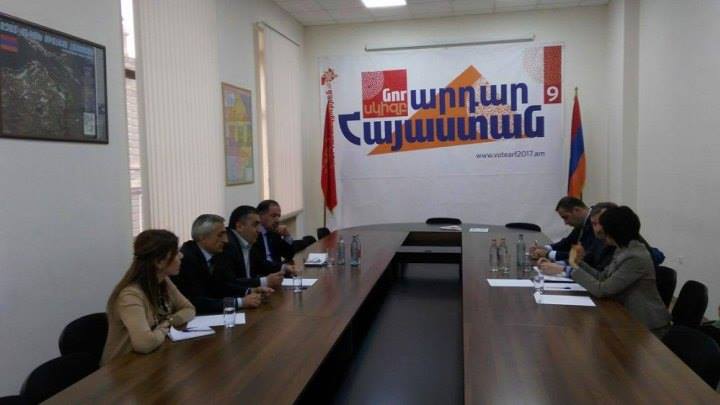 A scene from the meeting (Photo: ARF-D)

After welcoming Ambassador Mills, Vardanyan presented the ARF-D approaches and electoral platform for the upcoming elections and stressed the importance of instilling confidence in the public in the election process. Vardanyan also said that a number of changes have been made to the electoral code and certain technical measures have been implemented as a result of the work by the international organizations.

Ambassador Mills underlined that the vote of every Armenian citizen is vital to the election.

“I urge all citizens who are eligible to vote to get out on April 2 and vote, knowing that it is closed and in secretly done because of the new voting technology that is being used,” said Mills. “It is very important for the party’s to be responsible and follow all the rules of the election campaign, especially on voting day.”

Mills added that it is equally important for voters to be responsible as well and not give in to election bribes.

ARF-D Bureau member Spartak Seyranyan stated that the new conditions in the country have made it possible for voters to envision a new form of government. The ARF-D leaders stressed that the party has consistently remained honest, uncorrupted, and true to its principles since its inception, regardless of their position in government or in opposition.