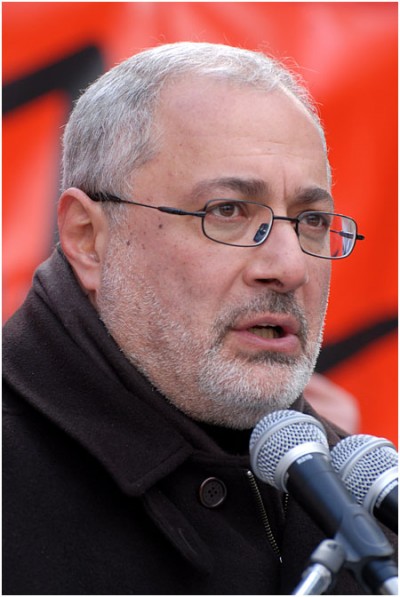 SPRING . 2008 . HAYTOUG . 03 — During a recent visit to the United States, the Armenian Youth Federation was able to organize a town hall meeting between Vice Speaker of the Armenian National Assembly and ARF-Dashnaktsutyun presidential candidate Vahan Hovhannesyan and the Armenian youth of Los Angeles. Portions of the question and answer session have been translated into English and are included below.

HAYTOUG — As the Armenian Revolutionary Federation’s candidate how do you plan on dealing with corruption in its governmental and societal manifestations?

Vahan Hovhannesyan — I must say that this is the most complex issue facing Armenia; it is also a problem in more developed nations, where unfortunately, it can not be asserted that the problem of corruption has been resolved. However, I believe that the size of Armenia makes the task of controlling corruption more feasible. There must be an institution in which the public can invest their trust, and that institution must be the judiciary. Having been bereft of an independent country for so long, the people of Armenian had adopted the notion that a just society comes hand in hand with independence. However, we have obtained independence but justice remains elusive. Consequently, the people have lost confidence in their own republic and government. Having lived through centuries of foreign subjugation, distrust of the government has become ingrained in the people of Armenia. For the people, the government is akin to the rain or other uncontrollable weather phenomenon which must simply be evaded; they dodge taxes and enlistment in the military and pay bribes to avoid fulfilling their responsibilities. The people that represent the government, the bureaucracy and the administrative officials must set an example. It is not possible to bring forth exemplary behavior in these officials by simply asking for it, or by persuasive rhetoric, or by showing motherly affection. There must be one forum that provides exacting and impartial justice, namely the judiciary. The new president of Armenia must make the establishment of justice within the judicial system a priority. If you succeed in doing this, over the course of a few years the conditions in Armenia will improve.

HAYTOUG — What affect will the newly adopted dual citizenship law have on the Republic of Armenia and on the presidential elections? Also, will the new law energize the repatriation movement?

Vahan Hovhannesyan — I have to say that this law was adopted 15 years later than it should have been. The barrier to dual citizenship was removed from the constitution in 2006 and the law was adopted in 2007. The truth is that it would have been just for the government to adopt a dual citizenship law immediately after attaining independence in 1991. It would have been just for the government of the time to do that because the existence of a Diaspora at that time, before the emigration process had started, was a consequence not of voluntary actions but of oppression including the Armenian Genocide and subjugation by Soviet authorities. Consequently, ethnic Armenians in the Diaspora have the same right to be deemed citizens of the Republic of Armenia as do Armenians born in Armenia or Karabagh. Unfortunately, the government of those days (Levon Der-Bedrosian’s Armenian National Movement), knowing that including the Diaspora in the political process of the Republic of Armenia would strengthen the ARF’s position, constricted the Diaspora’s involvement. In 1991, Armenia should have established itself as the legitimate heir of the First Republic of Armenia (1918-1921); this would have solved a few issues. Armenia would legally be seeking its rights to territories occupied by Turkey. I’m not referring to the borders defined by the Treaty of Sévres, rather the territory controlled by the First Republic including Gars, Ardahan, Igdir, Surmaloo, and in general the recognized borders at that time. Consequently, the descendants of the inhabitants of those areas would automatically receive Armenian citizenship. The adoption of this law, at this stage, might only have moral significance, because the government has not yet established the process for attaining citizenship and all the related issues such as the payment of taxes and military service, which must be resolved to consider the matter settled. The opposition camp, due to our pressure, recognized the equivalence of citizens and dual citizens. It does not matter if a citizen of the Republic of Armenia is also a citizen of Lebanon, France or the United States. That is a personal matter; as a citizen of the Republic of Armenia you have all the rights of a citizen as well as the obligations. Amongst the rights of a citizen is the right to vote in elections, but we find ourselves in a difficult situation because there are Armenian communities in countries where democracy is not highly respected. Consider how a regional governor in Russia might pressure the local Armenian leadership to deliver a particular vote by threatening the community financially and legally by exploiting their status as illegal immigrant workers. Thus the Armenian government would be shaped from outside Armenia. To avoid this danger a decision was made, with which the ARF agreed, that any citizen would have to place his or her vote from within the territory of the Republic of Armenia. Therefore, I do not expect dual citizens to play a great role in the upcoming elections. However, I expect that in future elections our compatriots living overseas will play a greater role.

HAYTOUG — How would you approach the Karabagh peace process? Does the ARF advocate a step-bystep approach or a package deal? Is peace going to be possible any time soon? How is Armenia responding to the Azeri government’s continual increases in defense spending and rhetoric of restarting combat?

Vahan Hovhannesyan — Petroleum is what funds the Azeri government and its army and they know that we are aware of that; in case of any aggressive action from them their oil pipelines will be endangered. Everything is possible, but they do take us seriously. Coming to the Karabagh peace process, there needs to be an understanding that our struggle isn’t for fun, our struggle needs to end by solving the Karabagh issue with Turkey and Azerbaijan. This is an issue for Turkey (due to their desire to enter the EU and the blockade of Armenia as a prime concern) and it’s an issue for Azerbaijan as well, because its own people aren’t benefiting from the petroleum treasures Azeri lands have; as they are diverted to the military and embezzled. It is an issue for everyone, and all three sides want to solve it as soon as possible. The youth needs to understand, that were not going out there trying to eliminate the Turkish government or the people of Azerbaijan. Armenians are 10 million worldwide compared to their 70 million populations. We need to find a peaceful solution to this issue, were not interested in starting a war against either Turkey nor Azerbaijan, and it is totally wrong when people think that the ARF is advocating a resumption of the war. It is a new era, a different world, and we need to adapt, find the best way to approach these people and peacefully get what is ours. 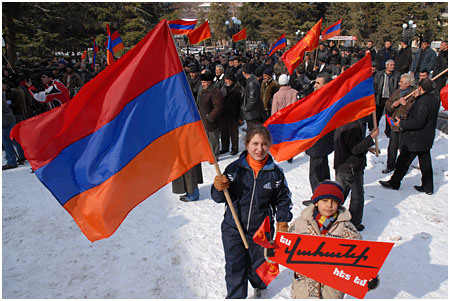 Campaigning for the ARF-Dashnaktsutyun presidential candidate

HAYTOUG — As Armenian youth we are continually seeking means which we can directly connect ourselves with and aid our homeland, without simple charity. How do you foresee better utilizing the huge asset which is the Diaspora to better aid the development of the Republic of Armenia?

Vahan Hovhannesyan — In my opinion, the most important way is to be well organized. All the usual methods (building schools in villages, etc.) help Armenia’s development, but that doesn’t solve the complicated issues that the Homeland is suffering. The Diaspora can have a huge effect on solving those issues, but it has to be an organized Diaspora. An Armenian individual that tries to help Armenia by himself cannot cause as much effect as an “organized Diaspora” such as the Armenian Youth Federation. For example: Armenia is the only nation that denied the United States Ambassador to Armenia appointed by the government. The US government was not able to send that ambassador to Armenia, because of the work done by the “organized” Armenian Diaspora in America. Even though helping Armenia financially isn’t expected from the youth as much, but it is a help that Armenia needs. Funds collected in the Diaspora isn’t the only thing that Armenia needs right now. Our country needs non-Armenian investors; we want foreigners to be interested in investing and opening up their businesses on our lands. Third, is a responsibility completely left to the youth – to pass on the education and skills learned in the Diaspora to our brothers and sisters in Armenia. Better and stronger communication between the youth in Diaspora and in Armenia is a must, which again ensures and continuously reminds them of their unity as Armenians.