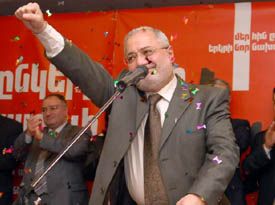 The presidential candidate of the Armenian Revolutionary Federation-Dashnaktsutyun questioned the legitimacy of Armenia’s leadership and pledged to end the country’s culture of electoral fraud as he campaigned in the southern Armavir region on Tuesday.

Addressing a small crowd that gathered in the eponymous regional capital, deputy parliament speaker Vahan Hovhannesyan explained why he thinks the country’s rulers have failed to deliver on their promises to the electorate.

“Presidential or parliamentary elections always create a situation in Armenia in which those who have come to power owe their success, their victory not to you, but to criminal or semi-criminal clans, wealthy individuals, oligarchs, senior government officials, who bring them votes on a plate by trampling on your rights, by crushing, deceiving and bribing people,” said Hovhannesyan. “That is lip service. The authority doesn’t benefit from that or become healthier as a result. But it is used to eating from that plate.”

“Only a Dashnaktsutyun member can break that plate,” he added.

The remarks were quite extraordinary for a leader of a party that has long stood by outgoing President Robert Kocharian and recognized the legitimacy of his victory in the disputed presidential elections of 1998 and 2003. They underscored Dashnaktsutyun’s efforts to distance itself from the Armenian government, in which it is represented by three ministers. The influential party has been trying to cast itself as a viable alternative to Kocharian’s preferred successor, Prime Minister Serzh Sargsyan.

Mindful of an unusually cold weather, Hovannisian hoped to hold his Armavir rally in the town’s main conference hall belonging to the municipality. But he had to rally supporters outdoors after being controversially denied permission to use the premises by Armavir Mayor Ruben Khlghatian. The latter is a member of Sargsyan’s Republican Party of Armenia (HHK).

The rebuff prompted an angry comment from Artur Aghabekian, chairman of the Armenian parliament’s defense committee and another prominent Dashnaktsutyun figure. “The conference hall must be returned to the people because the mayor has [effectively] privatized it. Do you agree with me?” Aghabekian aksed the crowd.

The Hovhannesyan campaign faced a similar problem in the nearby village of Mrgashat whose Republican mayor, Manvel Danielian, also refused to let the Dashnaktsutyun candidate use the village club. Danielian denied any political motives for his decision, saying that he was notified about Hovannisian’s visit to Mrgashat at a very short notice.

“Unfortunately, they fear any new thing in our country,” Hovhannesyan told villagers. “There is one new thing which we shouldn’t fear, which we should aspire to and succeed in bringing about. That new thing would be to elect an ARF-D president.”

“A president representing Dashnaktsutyun would really be your president,” he said.