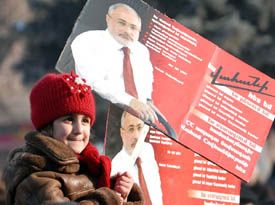 Vahan Hovhannesyan, the presidential candidate of the Armenian Revolutionary Federation-Dashnaktsutyun, said on Monday that he still hopes to win the backing of two prominent opposition leaders for the February 19 election.

In an interview with RFE/RL Armenian Service, Hovhannesyan also stood by his view that none of the nine presidential hopefuls, including Prime Minister Serzh Sargsyan, can garner sufficient votes to win the election already in the first round of voting.

“We are saving no effort to make that happen. We are talking, negotiating,” he said when asked about the possibility of the endorsement of his candidacy by opposition leaders Raffi Hovhannisian (no relation to Vahan) and Vazgen Manukyan.

“I think real chances of victory must outweigh any kind of ambition or pressure. If that is the case, I think we definitely have a chance to reach such agreement,” added the deputy speaker of Armenia’s parliament.

Manukyan, who is also running for president but is not regarded as a major contender, told RFE/RL at the weekend that he stands ready to form a “united front” with Dashnaktsutyun and Raffi Hovannisian’s Zharangutyun party. The veteran politician has so far avoided holding campaign rallies, and his comments may be an indication that he is considering dropping out of the race.

The more popular Zharangutyun leader has been courted by Dashnaktsutyun since his party’s relatively strong performance in the May 2007 parliamentary elections. But he has made it clear that he is unlikely to endorse any candidate before the fist round. Also, Raffi Hovannisian has ceded hundreds of seats in Armenian election commissions, reserved for Zharangutyun, to political allies of another leading contender, former President Levon Ter-Petrosian, rather than Dashnaktsutyun.

Vahan Hovhannisyan disapproved of the move. “Let Zharangutyun think about its political image and who it is giving those seats to and the fact that it lacks people to fill up those 830 [commission] vacancies,” he said.

Hovhannisyan also expressed confidence that the presidential race will require a run-off vote. “I think that a second round is becoming more and more likely,” he said.

President Robert Kocharian and senior members of the governing Republican Party (HHK) have said that Sargsyan is popular enough to win more than 50 percent of the vote in the first round and avoid a run-off.