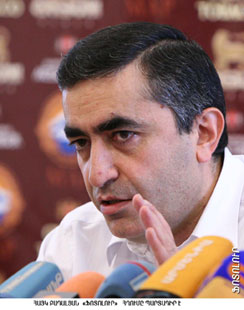 YEREVAN — On Oct. 23, the Armenian Revolutionary Federation-Dashnaktsutyun (ARF-D) unveiled a detailed plan — called a “roadmap to regime change” — saying that for Armenia to persevere and survive, fundamental changes are needed to its socio-economic, political, and governmental structures. These changes, it argued, were to ensure the pursuit of a national agenda.

Speaking at a press conference, ARF-D Supreme Council of Armenia chairman Armen Rustamyan introduced the plan, which provides guidelines of dealing with issues as varied as the Nagorno-Karabagh conflict, genocide recognition, as well as reforms in social, electoral, and economic structures.

“We are preparing for regime change,” declared Rustamyan. “Regime change has a broader meaning than a resignation demand. The country has deviated from its course and everything must be changed: the president, the National Assembly, the government, and all those who deal with the Turkish-Armenian protocols.”

Taking into consideration the imperative to confront the foreign and domestic challenges and dangers that have arisen as a result of the current situation, the ARF-D Supreme Council of Armenia has come forth with this blueprint as priorities for its political agenda.

The party emphasizes the importance of strategic principles aimed at resolving several issues of pan-national importance. They are: the Karabagh issue, Armenia-Turkey relations, Javakhk’s plight, diaspora relations, and the general demands and guidelines for the realization of Armenia’s foreign policy.

a) It is the ARF’s belief that the approach to resolve the Karabakh conflict should be based on the following principles:

1. Agreements by the Armenian side cannot compromise the will of the people of Karabakh as expressed in the declaration of independence in 1991 and the 2006 Mountainous (Nagorno)-Karabakh Republic Constitutional referendum.

3. International recognition of the Nagorno-Karabakh Republic within the foreign policy agenda must be pursued.

b) The prerequisites for normalizing relations with Turkey should be based on its willingness to recognize the Armenian Genocide and make reparations for the crime. The only concession  that Armenia can and has already made is the start of negotiations without any preconditions. The end to the land blockade and the establishment of diplomatic relations based on international norms and law, without preconditions, should be accepted as a natural starting point for negotiations. Armenia’s foreign policy should exercise mechanisms to oppose the anti-Armenian policies of Turkey and Azerbaijan.

c) The ARF-D’s Armenia body finds completely justified the aspirations of the Armenian population of Javakhk to press for their rights as prescribed by international obligations undertaken by Georgia, including calling for an autonomous status in a federal Georgia.

d) Armenia, Karabagh, and the Armenian Diaspora are a collective organism of a united Armenian nation. Thus, advantageous conditions should be created for the realization of dual citizenship, repatriation, and programs for the resettlement of Karabagh. One of the priorities of the ARF-Dashnaktsutyun is the development of a foreign policy doctrine based on strengthening the security and sovereignty of Armenia.

The ARF-D’s conviction is that domestic stability is based on social justice and freedom for all. As such, the government’s role as an initiator and administrator must be reorganized through the establishment of a social government that guarantees the creation and just distribution of wealth. The following are the main targets:

1. Taking responsibility for and executing the government’s social requirements based on relevant international agreements; especially:

2. Establishing an economic structure based on social security, the enhancement of local production, trade incentives, and fair competition.

The main objectives for the elimination of the plutocracy — oligarchy — in the country and stabilizing democracy are structural and constitutional-legal reforms; an advantageous climate for democratization; and the creation of a political and electoral infrastructure that guarantees the active and effective participation of the opposition.

The ARF-D of Armenia will base its activities on the aforementioned program.