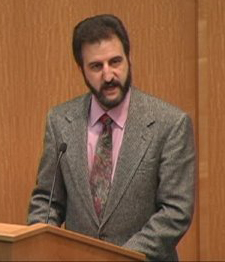 Dikran Kaligian has taught history at Clark University and Regis, Westfield State, and Wheaton colleges. He is past chairperson of the Armenian National Committee of America (ANCA) Eastern United States and managing editor of the Armenian Review. He received his Ph.D. in history from Boston College. His book, Armenian Organization and Ideology under Ottoman Rule, 1908-1914 (Transaction Publishers, 2009), is based on his doctoral dissertation.

Below is a short interview with Kaligian about the relations between the ARF and various groups in the Ottoman Empire during the two decades before the latter’s demise.
To read more about the ARFD-CUP relations, see Kaligian’s article “ARF-CUP Relations Under Ottoman Constitutional Rule.”

Khatchig Mouradian—For decades, the issue of the ARF’s relations with the CUP in the pre-genocide period has been used by Armenian opponents of the ARF to attack the party and accuse it of being short-sighted at best, and even of having contributed to the genocidal policies of the CUP. What does your research tell us about the political choices the ARF had to make during the period of Ottoman constitutional rule?

Dikran Kaligian—The ARF leadership was very much walking a tightrope because it realized that the only long-term chance for Armenian survival under Ottoman rule was if the Ottoman Constitution was allowed to be truly implemented. This required cooperation with the CUP, the party that restored the constitution and was trying to implement its terms. The reactionary and Islamist movements opposed both the constitution and the CUP. Once the ARF saw that the CUP was backing away from its commitment to constitutional rule and its initial efforts to treat Armenians as equal citizens, which had improved security conditions in the eastern provinces, the ARF ended its cooperation with the CUP.

It then resumed its efforts to arm the Armenian population but was hampered by the refusal of much of the middle and upper classes in places like Russia and Egypt to donate funds to purchase arms. Even Boghos Nubar Pasha criticized the stinginess of those refusing to contribute to the self-defense efforts.

K.M.—What are the lessons that today’s leaders engaging in Turkish-Armenian dialogue can derive from the period you have researched?

D.K.—One lesson that applies to both time periods is the need to analyze the internal and external political situation and motives of the party you are negotiating with. This was a major preoccupation of the ARF leadership and they came to see that the CUP leadership was playing a double game with them, at least by 1912. Armenia’s leadership needs to do a similar analysis today, but with many new geopolitical factors intruding, including European Union accession, oil pipelines, genocide recognition, and Karabagh self-determination. It is just as dangerous to exaggerate one’s vulnerability as it is to overestimate one’s strength; either can cause a fatal miscalculation during sensitive negotiations.

K.M.—You have used the ARF archives as one of your main sources for the book. Talk about the material available in those archives on the constitutional period.

D.K.—The ARF archives are a critical resource in analyzing the period before World War I in the Ottoman Empire. This is the case not just for understanding Armenian history, but Ottoman history, because the papers of the CUP were lost or destroyed at the end of the war. Thus in the archives, one can read a description of the CUP’s actions and an analysis of its motives by ARF leaders who had worked closely with some of its most important cadres.

The correspondence between key figures, like Rosdom and Simon Zavarian, reveal their frank opinions and analyses that can be found nowhere else. The letters between the Eastern and Western Bureaus increase our understanding of the often conflicting aims and pressures they were influenced by, as well as the difference between politics in Constantinople and in Erzerum. Correspondence between the bureaus and their bodies in each of the major cities and towns of the provinces provide a picture of life and political conditions that are a world away from the imperial capital, Constantinople. Unfortunately, much of the history of the Ottoman Empire has been written based on the official policies of the government and events in the capital. By utilizing sources in the ARF archives that describe unofficial contacts and political relations or report on events occurring in the country-at-large, hundreds of miles from Constantinople, a more complete picture can be drawn and more accurate analysis can be made of the critical and turbulent years from 1908-14. That is what I have tried to do in my book.

K.M.—Talk about the relations of the ARF in the period of your research with other Armenian political groups as well as the Patriarchate. To what extent was there coordination or cooperation?

The second venue for cooperation and coordination was the Armenian National Assembly, which for years had been elected to represent the Armenian millet. The ARF worked within the assembly so that political initiatives, such as the list of reform demands to be presented to the European powers negotiating a peace treaty after the First Balkan War, represented a consensus of the Armenian community. The Patriarch worked with the assembly to develop this consensus, but on a number of occasions ignored it and took contradictory positions on his own as the nominal head of the Armenian millet. On these occasions, the ARF and the Patriarch seriously clashed.

D.K.—Armenian relations with Kurdish tribes had long been problematic as these tribes had been responsible for much of the years of violence and depredations against Armenian villagers in the provinces. The announcement of the restoration of the Ottoman Constitution in 1908 brought with it a dramatic drop in acts of violence by Kurdish tribes against the Armenian population. This was because of the CUP’s public commitment to the principle that, under the constitution, all Ottoman citizens were equal, regardless of religion. The prospect that they could no longer act with impunity because they were Muslim halted most violence in the provinces in 1909 and 1910. Once the CUP began to retreat from the constitution, the violence resumed.

The Kurds also figured prominently in the ARF’s demands on the lands issue because it called for the return of land, much of which had been appropriated by Kurdish chiefs. On the other hand, agrarian Kurds had been subject to much of the same treatment by the tribal chiefs and also hoped for justice under the constitutional regime.

K.M.—Chief among the grievances of the Armenian in that period was the agrarian issue. What were the policies of the ARF in this respect and how did the agrarian problem unfold in the year’s leading up to the genocide?

D.K.—One of the foremost goals of cooperation for the ARF was the return of land that had been confiscated from Armenians by Turkish lords, Kurdish tribes, and others over the prior years. Armenian villages in the provinces had been depopulated as they lost the farmland they needed to support their families, and this had been the sultan’s intention in allowing the land deprivation. This was a major cause of the large-scale migration of rural Armenians to the towns and cities of the Ottoman Empire or abroad. The CUP initially took steps to redistribute land and Armenian landowners began returning to their villages; but as the government faced military defeats and internal political opposition, they retreated on this issue as well. This failure was critical to the ARF’s determination that the CUP had become more interested in holding onto power than in improving the country.

The ARF had begun cooperation with the CUP with a series of demands for reform including not just the lands issue, but also security, judicial reforms, political reforms, and the replacement of administrative officials who were anti-Armenian and anti-constitution. While there was progress in the first 18 months in improved security and the replacement of some of the most egregious officials, as the CUP’s political position weakened, the ARF placed a lower priority on the other items and stressed the administrative resolution of the lands issue as the most immediate need of the Armenian population.

When the CUP began to take steps to return lands to dispossessed Armenian peasants, they ran into opposition from Kurdish and Turkish parliamentary deputies from the eastern provinces and the aghas and large landowners whose interests they represented. The CUP was reluctant to antagonize these powerful men in the provinces and also feared the backlash from the reactionaries in the political opposition if they were to take action that would primarily benefit Armenians. By the end of 1910, it had become clear that there would be no substantial progress in land restitution. Given the ARF’s investment in the issue and the fundamental role it played in any determination of the extent of justice and equal status for Armenians under the constitution, it would be a decisive factor in the decision in 1912 to break off relations with the CUP.