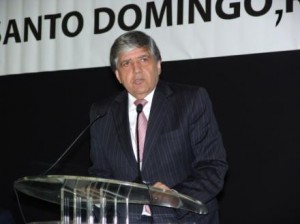 The Socialist International’s second Council meeting of the year took place in Santo Domingo, Dominican Republic, on 23 and 24 November, 2009, hosted by its member party, the Dominican Revolutionary Party PRD, under the title ‘At a turning point for a sustainable future – the Social Democratic Way Forward.’

The meeting opened with addresses from the leader of the PRD, Miguel Vargas Maldonado and the President of the Socialist International and Prime Minister of Greece George Papandreou. The Council discussed an Agenda, introduced by Secretary General Luis Ayala, which centred on; ‘For a new deal with nature and a new treaty in Copenhagen’; Overcoming inequality, creating jobs and defeating poverty in the world economy; Working for a world free of nuclear weapons and for arms control; and ‘Securing democracy and reaffirming people’s rights’. During this last item on the agenda, Mario Nalpatian presented the ARF-Dashnaktsutyun’s position on the recently signed Armenia-Turkey protocols.

On the second day of the meeting, the eve of the anniversary of the assassination of the Mirabal sisters on 25 November 1960, today the International Day for the Elimination of Violence Against Women, the Council held a one minute silence in their memory and in respect to women everywhere who are now victims of violence.

The Council, following two days of debate, adopted declarations on Climate Change in the lead up to Copenhagen; on the challenge of Global Development; on Nuclear Disarmament and Arms Control; and on Democracy. Resolutions were also adopted on human rights in Iran and on the situation in the Middle East. All ammendments proposed by the ARF-Dashnaktsutyun in the resolution on the challenges to Global Development were accepted.

The Council also agreed on sending a message of support and solidarity to the imprisoned leader of the National League for Democracy of Burma, Aung Sang Suu Kyi, a special Honorary President of the SI. In regard to Honduras, the Council agreed to deplore the decision to hold elections on 29 November before the reinstatement of the constitutionally-elected government undermining both the agreement reached for a way out of the crisis and the elections themselves. Ahead of the forthcoming second round of the Presidential elections in Uruguay, the Council agreed to send its best wishes for success to the Frente Amplio and its candidate José Mujica. In another decision, the Council agreed to share the latest call made by the SI Committee for Latin America and the Caribbean to support the request by the UN Special Committee on Decolonization for the UN General Assembly to examine the case of Puerto Rico. Equally, the Council agreed to endorse the Declaration adopted by the SI Mediterranean Committee at its recent meeting in Barcelona which covers a whole range of issues in relation to that region and on Western Sahara.

The Finance and Administration Committee and the Ethics Committee both presented their reports, which were subsequently adopted.

The Socialist International is the worldwide organisation of social democratic, socialist and labour parties. It currently brings together 170 political parties and organisations from over 140 countries from all continents.

The ARF-Dashnaktsutyun is the only party in the CIS countries which a full-member status in the SI. ARF-D member Maria Titizian is vice-president of the SI. The ARF-D relevant organizations are also full members of the Socialist International Women (SIW) and the International Union of Socialist Youth (IUSY).