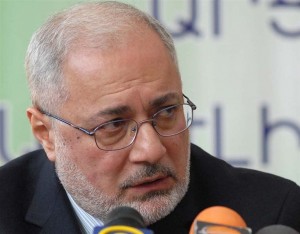 Vahan Hovhannesyan, a leader of the Armenian Revolutionary Federation, speaks at a news conference on November 24, 2009.

A leader of the Armenian Revolutionary Federation-Dashnaktsutyun accused Russia on Tuesday of acting against the national interests of Armenia, Moscow’s closest regional ally, in its growing dealings with Turkey and Azerbaijan.

“I consider Russia’s current role in both Armenian-Turkish and Armenian-Azerbaijani relations to be very dangerous for Armenia,” Hovhannesyan declared at a news conference.

The remark was extraordinary given Dashnaktsutyun’s long-standing support for Armenia’s close political, security and economic ties with Russia as the main instrument of countering Turkish influence in the region. The influential party adopted what many regard as a pro-Russian foreign policy orientation years before the Soviet collapse, when it was still banned in Armenia and had branches only its worldwide Diaspora.

Hovhannesyan, who also leads Dashnaktsutyun’s faction in the Armenian parliament, did not elaborate on his highly negative assessment of Moscow’s current policies on the region. But he did attack the foreign powers, among them Russia, trying to broker a solution to the Nagorno-Karabakh. He said they are seeking to clinch additional concessions from Armenia in an effort to facilitate the ratification by the Turkish parliament of the recently signed Turkish-Armenian agreements.

Dashnaktsutyun has condemned the agreements envisaging the normalization of relations between the two historical foes as a sellout. Russia and the West, by contrast, have welcomed them as a ground-breaking development. The Russian support came against the background of Moscow’s deepening cooperation with Ankara focusing on energy.

Hovhannesyan’s comments coincided with talks held by Russia’s President Dmitry Medvedev with his visiting Azerbaijani counterpart, Ilham Aliyev, in the Russian city of Ulyanovsk. The two leaders also inaugurated a statue of Aliyev’s late father and predecessor Heydar there.

According to the RIA-Novosti news agency, Medvedev touted that as an example of “how to build relations in the post-Soviet space.” “We can calmly and fruitfully discuss political, economic and regional problems,” he said, opening the talks.

“If everyone in the world had relations like Azerbaijan and Russia have, there would be no problems in the world,” Aliyev said for his part. He described those relations as “strategic partnership.”

Neither president made any public statements after the meeting held just two days after Aliyev and Armenian President Serzh Sargsyan held face-to-face talks on Karabakh in Munich. The talks were overshadowed by Aliyev’s fresh threats to place Karabakh back under Azerbaijani rule “by military means.” Yerevan responded to that by threatening to formally recognize Karabakh as an independent state.

Hovhannesyan said Sargsyan should have gone farther. “The only right step would have been not going to Munich at all because negotiating under the pressure of a ultimatum is not the right thing,” he said. “If Azerbaijan attacks Artsakh, then I think the top objective must be not [Karabakh’s] recognition but a complete destruction of the Azerbaijani aggressor on the battlefield,” he added.

Turning to domestic politics, Hovannisian agreed with other Dashnaktsutyun leaders’ belief that Ter-Petrosian offered to cut a deal with Sarkisian in his last speech delivered before senior members of his Armenian National Congress (HAK) alliance.

In that speech, Ter-Petrosian gave a mostly positive assessment of the Turkish-Armenian agreements and defended the president against harsh criticism from Dashnaktsutyun and other “extreme nationalists.” The HAK leader also denounced Kocharian’s policies on Turkey and the Nagorno-Karabakh conflict that were strongly backed by Dashnaktsutyun throughout his decade-long presidency.

“The accusations addressed to me are so absurd that there is no point in dwelling on their content because of the complete absence thereof,” Kocharian shot back in a rare statement issued last week. He compared Ter-Petrosian to a scared man whom he said he met during a recent, hitherto unpublicized, safari to Africa. Kocharian said the “European” hunter had been “quite smashed” by a bear several years ago and now flinches at every mention of the animal.

Hovhannesyan found Kocharian’s riposte “inadequate.” “We expected a more serious political response,” said the Dashnaktsutyun leader. “Mr. Kocharian probably wanted to stress his detachment from politics. But when you don’t deal with politics, it comes and deals with you.”