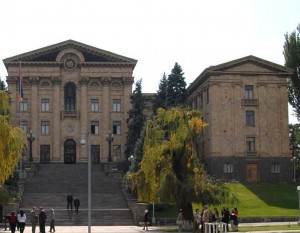 The parliament building in Yerevan.

The National Assembly on Monday began debating and looked set to approve the dispatch of a small contingent of Armenian troops to Afghanistan planned by the government.

Defense Minister Seyran Ohanian confirmed that the 40-strong detachment is due to be deployed in the northern Afghan city of Kunduz in February and to serve there under German command.

“The main mission of the contingent would be to protect the runway and other facilities of an airport in the city of Kunduz,” Ohanian told lawmakers as he presented a relevant agreement with NATO which he signed a month ago.

The agreement commits Yerevan to contributing between 35 and 80 soldiers to the NATO-led International Security Assistance Force (ISAF) which has been fighting the Taliban insurgency in Afghanistan. Under Armenia’s constitution, it has to be ratified by the parliament in order to enter into force.

“I think that this mission will contribute to the accomplishment of our national objectives,” Ohanian told journalists. “We will gain a stake in the formation of an international security system.” He also argued that neighboring Azerbaijan, Georgia and Turkey already have troops on the ground.

The Armenian government enjoys a comfortable majority in the National Assembly should have no trouble securing the agreement’s ratification. It also received a reluctant backing of the two opposition parties represented in the parliament: Zharangutyun and the Armenian Revolutionary Federation (Dashnaktsutyun). Zharangutyun’s Armen Martirosian said the Afghan mission is a chance for Armenia to improve its reputation abroad which he believes was badly damaged by last year’s disputed presidential election.

“The situation with democracy is so brilliant, things are so fantastic in our country that we are now going to help establish democracy in Afghanistan,” Vahan Hovhannesyan, Dashnaktsutyun’s parliamentary leader, noted with sarcasm. “Unfortunately, we will fail to do that. Having said that, we have to go there.”