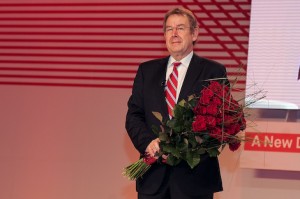 The 8th Congress of the Party of European Socialists (PES) took place in the capital of the Czech Republic, Prague, on December 7-8, 2009, with the participation of more than 1500 representatives of member parties, members of the European Parliament, government ministers from European member states, including representatives from sister parties and PES activists. Among the sister parties invited to the congress was the Armenian Revolutionary Federation-Dashnaktsutyun (ARF-D), which was represented by Armen Rustamyan, chairman of the ARF-D Supreme Council of Armenia, and Mario Nalbatian, member of the ARF-D Bureau and ARF-D representative to the Socialist International.

The Congress is held at least twice every five years and determines the party’s policies, makes administrative amendments, passes decisions about the status of party memberships and elects the party’s president

This Congress, which took place following the 2009 European Parliament elections in June, disccused the political and ideological challenges facing the European Left in the 21st Century.

The Congress re-elected Poul Nyrup Rasmussen as president who was first elected to that position at the 2004 PES Congress.

The members of the ARF-D delegation had numerous meetings with the representatives of different political parties; presented the party’s position regarding a variety of issues, in particular the ARF-D policy guidelines for the party’s organization in Armenia and also disccussed potential cooperation. Specific agreements of understanding were made with several parties.

Immediately following the congress, Armen Rustamyan departed for the United States for a working visit and Mario Nalbatian travelled to Moscow. Part of Rustamyan’s working schedule in the U.S. includes political meetings in Washington. In Moscow, Nalbatian as Co-Chair of the Socialist International’s Committee on the CIS, the Caucasus and the Black Sea Region, accompanied by ARF-D Bureau member Levon Mgrtchyan, will have meetings with the Just Russia Party and also with media outlets.