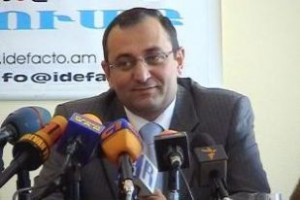 No proposal of ARF Dashnaktsutyun was accepted by RA Government since it joined the opposition, even the ones presented when ARFD was in ruling coalition and were underway, are currently turned down. This proves the fact that RA authorities are guided not by political or economic expediency, but political conjecture, ARFD member Artsvik Minasyan told News.am.

He expressed bewilderment with the fact that RA Government even rejected the proposal by ARFD to increase budgetary allocations to NKR security zone settlement. Minasyan also criticized severely the authorities’ economic policy stating that Armenia’s economy will hereafter depend on international market due to their illiterate actions. As for the pre-crisis achievements of Armenian economy and GDP two-digit growth, it is nothing else but a bubble, if it does not impact the social level of the population, Minasyan underlined. “Such a growth is worthless if people keep on living in bad conditions,” he outlined. According to him, Armenia’s banking sector is in deplorable state too.

Referring to the RA authorities’ intention to abolish oligopoly, Minasyan noted all the steps in this direction taken by Government can expose over 4% of the economy, whereas according to ARFD calculations (that matches with the official data) the level of shadow economy is up to 41% in Armenia or even 60% under certain estimates. “41% of hidden economy totals AMD 243bn, of which 4% is a scanty part and will not affect the economy dramatically,” Minasyan concluded.